Hi Islandgirl75, welcome to the "Tumbleweed Connection" week. Thank you for the acceptation. If you listen to this album, "Tumbleweed Connection" I still get goosebumps and it seems not out of date. It was critically aclaimed, instead it didn't have singles to release. Otherwise, I've always been fascinating with Elton's albums and singles history results in your music national chart lists. Canada is one of the countries where Elton's sales more records, US and UK apart.

Well, I am from British Columbia, Canada. I am a musician just like my dad and brother, and am very happily married. 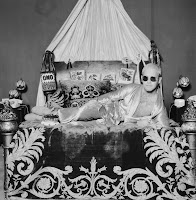 I have been a fan of Elton's every since I can remember. With growing up in a family where music was all around me I heard Elton for the first time when I was a baby. I have been a fan of his for over 30 years and absolutely love his music and him as a person. He is one of the great musicians out there. His genuine care for his fans and the humanitarian work he does is second to none.

Perfect! What was it like seeing Elton for the first time and how many concerts have you been? Have you even been front row? And also, could you tell us if you ever have been in touch with him?

I have been to 2 of Elton's concerts. The first time I saw Elton in concert was in 2001. He was in Vancouver with the Face To Face tour with Billy Joel. I was in total awe. The show was fantastic! Seeing both together was a real treat. The second concert was in Vancouver again in 2005. This concert was awesome! I went with my husband and we had 9th row floor seats right in front of the piano. That show stands out most for me. I couldn't believe the luck we had with our tickets. We got Rocket tickets through Elton's Fan Club and were really shocked at how close we were. Elton was brilliant as usual and looking over his glasses into the crowd a ton. He was so happy to be there and it really showed in his performance. I have never had front row tickets before but hey anything is possible in the future. I haven't been in touch with Elton personally.

Great!!! Which is the most foolish thing, or incredible thing, you did for Elton? If not, what you would do if you meet him sometime? What would you talk about and which question would you like to ask him?

I can't really say I have done anything foolish or incredible for Elton. I would but would love to one day if only to shake his hand and tell him thank you for all he has done both musically and as a person for me. It is hard to say what I would talk to him about. I think that if I met him what I spoke to him about with would have to be something I would think of at the time I met him. The one question I would ask him would be who is the person who has had the biggest influence on him as a person.

OK! How it was, and still is, the success of Elton in your country? Which have been his hits in sales terms? And which are the canadian's favourite Elton's albums or songs? And could you still hear Elton's music in the radio, nowadays? And which should do Elton's next step in his music career?

Elton is still a huge success here in Canada. His most recent release "Rocket Man : Number Ones" has done very well. I can't really speak for all Canadians but as far as my favorite Elton Albums I would have to say that, "Reg Strikes Back", "Live In Australia", "Captain And The Kid", "Captain Fantastic And The Brown Dirt Cowboy" and "Sleeping With The Past", to name a few. My favorite songs are, "The Bridge", "Recover Your Soul", "Meal Ticket", "Grey Seal", "Poor Cow", "Runaway Train", "Healing Hands", there are so many but those a some of them. You can still here Elton's music on the radio on daily basis here. I think that Elton should do what he wants with his career at this point. He has done so much in his music career that if he didn't release a new album I think it'd be ok. A new album would be great but the albums that are out now will live on forever.

I see... And in Elton's albums... Which are the songs that should have been singles and weren't? What do you think about the "B" sides... Were they good songs, any in particular? Do you think it was an error not to put out singles from recent albums?

There are so many songs to choose from with regard to a single. I think the ones the he chose were great. The "B" sides that I have are, I think good song and well done. I think that Elton should have released singles on the recent albums. Especially for the song "The Bridge". The song itself stands on it's own as a classic in my view.

Well, as you know this is the "Tumbleweed Connection" Week. Which are your feelings about this album? And Bernie's lyrics? Some of the songs received strong FM airplay then in your country. And what do you think about the DeLuxe releases? Should that continued with other albums?

I like "Tumbleweed Connection". Being that it was Elton's first album released in America, I feel that it was very well done and that Bernie's lyrics were brilliant. I personally like "Where To Now St. Peter" best of all on this album. The deluxe releases are very well put together and I like them very much. I think that yes, that should be continued with other albums for sure.

The item that I cherish most that I have of Elton's is the first concert program that I got of his. It reminds of how special it was to see him live in concert for the first time. My first Elton concert was the first real concert I had seen live.

To other Eltonites I would have to say keep up with the love and support you show to Elton. He truly deserves it and really loves his fans.

Thanks a bunch, Shea. Really a pleasure to chat with you again. I get funny doing this interview with you, it was an enjoyable and worth experience.Thank you. Take care.

I can't believe I've never been to see Billy Joel live, even when both he and Elton John came around a few years ago. I love Billy Joel songs and I love how he tends to stick to his own material and not play as many cover songs. One of these days...