The Story Behind Songs: Bernie's Fascination For Old West

"Where To Now St. Peter"
The song features a soldier killed in action as he faces St. Peter, revolves around an ethereal theme, so Dudgeon adds echo to John's stunning falsetto vocals and swirls them around the speakers as Caleb Quaye's guitar licks flicker like the flames of hell itself.

"Son of Your Father"
That is a moralistic tale which, after describing a fight between friends that leaves them both dead, concludes that "... charity's an argument that only leads to harm". Elton's demo was a gospel-flavored ballad. 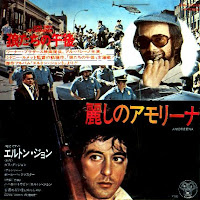 It's about a countryside young woman "a lusty flower with a bronze body". Bernie suggested then manager's Ray Williams should name his daughter Amoreena. He did it, and Bernie wrote the song. This song opened the movie "Dog Day Afternoon" in 1975.

Ballad Of A Well Known Gun:
It's about an outlaw on the run who is finally tracked down and apprehended. Madeleine Bell and Lesley Duncan provided backing vocals.

My father's gun:
The setting is the American Civil War. A young man whose father has been killed by the yankees determinates the avenge the death by joining the fighting in New Orleans.

Burn Down The Mission:
In this western epic tale, Elton seems to be vaguely echoing the sentiments of revolution. It remained a concert staple throughout his career.
by Jackrabbit on 1:01 pm