This week I have another very special guest. He owns “Bad Side Of The Moon”, one of my favourite Elton’s fansites. The website is in italian language, yes, but this does not make it no less interesting, particularly the contrary. So, Hi, Beppe, thank you very much for accepting the invitation. It’s an honour for me to have you. I chose the “Elton John Album” week for you, that was an album which represented Elton’s first success and marked his really debut as an artist.

Hi. I’m Giuseppe (Beppe) Bonaventura, I have a wife, a son, and I live in Crema, a small town near Milano, in the north of Italy.

Well, when you became an Eltonite? Remember the first time you heard Elton’s music and what moves you to buy his music?

Yes, I remember it very well! Long long time ago, in the hot summer of 1973, I was on Garda Lake for the summer holidays. I was not a music fan in those days, but I heard from the radio a beautiful song that changed my life; the song was Rocket Man and I was shocked by Elton. My story of fan and collector of music began that day. And my first album was (obviously) Honky Chateau!

Perfect! What was it like seeing Elton for the first time and how many concerts have you been? Have you even been front row? And also, could you tell us if you ever have been in touch with him?

After the first Italian tour in 1973, that I missed, Elton came back in my country only in 1984, for two shows in Milan, at the old Palatenda; it was the Breaking Hearts tour, with the old band with Nigel, Dee, Davey and Fred Mandel. It was my first Elton show and I remember it as a really fantastic one, after all those years without a chance to see him live. Since 1974, I have been at about thirty shows, in Italy, France, Germany and Austria, both solo piano and with the band, plus the promo show in Milan for the upcoming Peachtree Road album (broadcasted by MTV) and the Telecomcerto in Rome, in front of the Coliseum, with an audience of about 500.000 people (broadcasted by the Italian television in 2005). And I am very proud of my ticket n°1, in the first row for the fantastic “An Evening With EJ and Ray Cooper” tour in Milan, the best show with a wonderful set list!

I’ve been in touch with Elton two times, always in France. The first time we found him in Nice (after the Nikaia shows in 2001), shopping at the local Fnac; Elton was shopping too and he kindly refused a picture with fans.

In 2002, we were in Paris for the Bercy show, and we found Elton shopping at the Virgin Megastore (he’s an avid record collector, too) on the Champs Eliseés, but the story had the same sad ending: he refused a picture with us. Really, not good memories from these meetings!

I understand... Which could be a great set list, in your opinion? Is there any song that Elton hasn’t played yet, and you think that he should do it? And you prefer the Elton’s solo tours or better with band? With the same musicians as his current band or you miss someone of the past?

I liked very much the tour with Ray Cooper with a real piano (Steinway), I don’t like the Yamaha piano with the horrible synth effects, like he was a piano-bar player. And the Las Vegas Red Piano is for me the worst choice for his future, a lot of money but “a sad sad situation” …

I wish a new sound live instead of the old same production and probably a new band. I never liked Johnstone very much, Nigel was a hero for me, but now it’s time to change. Why not a new trio tour, piano, bass and drums (such as the last tour of Joe Jackson, Tori Amos, …)? But with a true piano!

Great!!! Which is the most foolish thing, or incredible thing, you did for Elton, if you did it? What you would do if you meet him sometime? What would you talk about and which question would you like to ask him?

I was mad collecting him though the years (really mad!), singles, album, vinyls, CD’s, promos, bootlegs, tour programs, books, covers, music sheets, … I have the same single from 10, 20, 30 different countries …

After all these years, my wife hates my records and also hates Elton!
A question for Elton? Why “Victim Of Love”?!? Why???

I always asking me the same... And how was the success of Elton John in your country? Which references had italians about Elton, specially in the 70s and 80s? And the most succesful albums? Could you still hear Elton´s music now on radio stations? And which should do Elton’s next step in his music career, in your opinion?

Elton was a n° 1 singer in 1973, when “Crocodile Rock” and the “Don’t Shoot Me” album peaked the Italian charts, but after this Elton was not really a top seller for many many years. He was well-known, had good sales, but not a huge success. Only in 1988, with the “Reg Strikes” album and the single “A Word In Spanish” (and after he was a guest at the Sanremo Festival, an important musical contest here in Italy) his fame went up again and the sales too. “The One” album was another big hit here with massive airplay and with the “The Lion King” soundtrack a new generation of fans grew up. Unfortunately in Italy, Elton does not have the status of rock hero of the seventies such as Bowie, Lou Reed or groups like Genesis, Pink Floyd, Queen, …, he’s always remembered for the gossip and not for his music.

About the future? Maybe a solo piano album in my dreams!

Right! And in Elton’s albums... Which are the songs that should have been singles and weren’t? What do you think about the “B” sides... Were they good songs, any in particular? Do you think it was an error not to put out singles from recent albums?

I think that “Harmony” could have been an excellent single, and also “Sweet Painted Lady”. “A Woman’s Needs” from the Duets album was another good song for the US market. Two powerful singles such as “I’m still standing” in 1983 and “I Don’t Wanna Go On...” in 1988 helped Elton to be again up in the charts.

Yes, no singles from the “Captain & The Kid” was a big mistake, no singles and no videoclips means no airplay and low sales. “And The House Fell Down” and “Blues Never Fade Away” should have been good choices for airplay.

I think that “All That I’m Allowed” was a terrible choice as a single from “Peachtree Road” (and for me a terrible song!)

Ok!! As you know this is the “Elton John Album” Week. Which are your feelings about this album? And Bernie’s lyrics? And what do you think about the DeLuxe releases? Should that continued with other albums?

“Elton John”, together with “Madman Across The Water” and “Tumbleweed Connection”, is the top in my personal chart, I’m an “old” fan and I prefer the “old” Elton. Since 1972, with the “Honky Chateau” album, the sound and the production changed direction towards a more commercial music, the seventies were a golden age for Elton, with wonderful records (“Honky”, “GYBR”, “Captain” …) but the early age was another thing.

The “Elton John” album is a masterpiece, with wonderful songs and wonderful lyrics by Bernie, with my only remark about the “heavy” orchestral arrangement by Paul Buckmaster. Buckmaster is a genius and his work was fantastic (“Madman” and “Tumbleweed” at the top), but in this album the sound is too much gloomy. And in this album we can find the Elton trademark, “Your Song”, a standard in the contemporary music. The deluxe edition is fantastic, I love the piano demos and the outtakes and I hope other albums with extra tracks and rarities.

Please, tell us what we could find on "Bad Side Of The Moon", your website... that's on http://www.eltonjohnitaly.com/ I particularly like "Immagini" section where fans can post their photos and personal experiences, could they?

In the early nineties, for a couple of years, I produced a small fanzine about Elton called “Madman”, dedicated to the collectors, but the internet era killed this project. Bad Side Of The Moon was born at the end of 2000 only as a joke, a little web page, only a test for me. But, after all these years it became a huge website about Elton and his music with a lot of sections, hundreds of pages, thousands of pictures about Elton and fans, and a discussion forum in italian language.
Every day, I spend a lot of time about Bad Side, it’s a (not paid!) job, a passion, a hobby, a drug! I’m happy that a lot of fans meet each others through Bad Side. In the “Immagini” section you can find a lot of pictures made by fans during the shows, all pictures are welcome, the section is a big database for and from the fans. For example, about the Lucca Show in 2007, there are about 460 pics from many people!

Wow!!! Which is your Elton’s item that you really appreciate, for being hard to get or for the happiness you’ve got to have it? 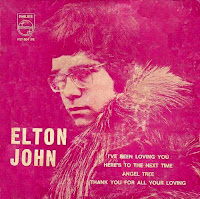 The highlights of my collection are two: one copy of the original test pressing white label from the “Saturday Sun Session”, the sessions with the songs of Nick Drake (and others) performed by a young Elton in 1970, and never released on a standard record; and the extremely rare EP from Portugal, issued by Philips in 1968, including “Angel Tree” and “Thank You For Your Loving”. My collection about Elton is really big (about 4.500 records!) but these items are for me very special (and very expensive!!!)

Wow!!!! Finally, could you tell me your five favourite Elton John’s songs in running order, for my AllSongsList, please?

I love the early Elton, and I hope that Elton will be always remembered for songs such as “Talking Old Soldiers” or “Levon”, and not for “Nikita” or “Sacrifice”!

Thanks a bunch, Beppe. Really a pleasure to chat with you . I get funny doing this interview with you, it was an enjoyable and worth experience.Thank you. Take care.
by Jackrabbit on 7:53 am