The Story Behind "Someone Saved My Life Tonight" 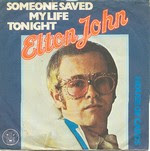 Elton is singing about himself. Linda Woodrow was his bride-to-be. The couple met on Christmas Eve 1967 at a cabaret club in Sheffield when Elton was in Long John Baldry's backing band. They found a basement in Islington, North London, where lyricist Bernie Taupin became their flatmate.

In Two Rooms tribute project, Elton explained: “I was going to get married once when I was younger, and I went out and got drunk with Long John Baldry and Bernie and John said I shouldn't get married. I knew he was right but I didn't know how to get out of it so, I just got drunk and went home and said I'm not getting married”.

Asked for this song, Bernie said: “One day I was coming out of my room and coming out of my room and walking down the hall I smelt gas. I thought oh, great, somebody's left the oven on in the kitchen. I walk in the kitchen and there's Elton lying on the floor with the gas oven open. My inmediate thing should have been oh, my God, he's tried to kill himself. But I started laughing because he'd got the gas oven open, he was lying on a pillow and he'd opened all the windows”.

Bernie has stated that “Someone saved my life tonight” was about the suicide attempt and the marriage that never was. While John Baldry is the “sugar bear” of the song, Linda was the “princess perched in her electric chair” and Elton's stepfather “Derf” and mother who “They're coming in the morning with a truck to take me home” (he and Bernie).

In the line, "Paying your H.P. demands forever," the H.P. stands for "hire-purchase" payments, i.e., buying things on an installment plan. Elton is referring to the payments he would have to make if he were to have married a woman and spent his life disguising his identity as a gay man.
by Jackrabbit on 2:46 pm