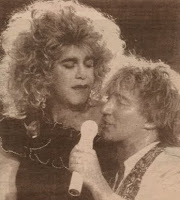 When the western world used the Julian calendar, the year began on March 25th because they celebrated the start of a new year with the start of spring. That all changed in the 1500s, when we switched to the Gregorian calendar, moving the New Year to the first of January, without realizing Elton was born precisely on the 25th (just joking). However, people who insisted on celebrating the “old” New Year became known as April fools, and it became common to play jokes and tricks on them. It has been very usual to see newpapers and websites trying to trick us, but... without success?

Hercules website announced that "Elton and David have decided to chose one huge Elton fan as godparent for their son Zachary", inviting to send an application and a picture of the interested making sure to persued the parents "why you should be the one to join their inner circle in being a godparent of their son". An april fools day joke, of course. That was not the first year they tried to trick the community, always with a good sense of humour and a brilliant well researched ideas. For example, in 2009, they talked about Elton's intention to do his New Year's Eve concert in the south Pacific Ocean, at the Tonga Islands. A dreamed concert, with four parts: Elton would start with a solo set (approx. 30 minutes) before being joined on stage by percussionist Ray Cooper for the second part of the show (approx. 45 minutes), then be completed by the Elton John Band for a third set of approx. one hour and, for the last part, which would begin shortly before midnight, Billy Joel would added to their grand finale, as they did on their "Face to Face" tour. Also, "some of the big cruise ships, including the Queen Mary 2, would planned to drop anchor at the time of the show, allowing their passengers to watch the concert from the comfort of their luxury cabins with balconies or from the deck of the ships". Another, in 2004, lots of fans called a faked phone number in Las Vegas and sang their heart out to meet Elton in Las Vegas. Only what they had to do, was "identify the two Elton John songs in which you can find "Caeasars Palace". In other words, there is one song with the term 'Caesar's' in the lyrics, and one Elton John song that contains the term 'palace'". 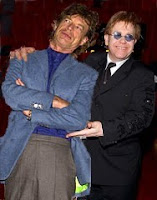 eltonjohnworld is another of the referenced websites we have. They made go crazy old rabbit in 2003 searching for a "new duet" Elton and Mick Jagger announced to record that same year. "Upbeat", the track, it would have been composed by the two artists plus Bernie's lyrics, with proceeds going to a "yet-to-be-announced" charity. Jagger compared it as "the sounds of Caribbean clubs he visits" explained the Stone with satisfaction. Another great one happened in 2004, when "Elton would have been meeting with Calvin Klein designer to promote the new red piano masculine fragance to include citrus and forest highlights", it sounded good afterall. Don't forget Elton would "do a song for a tv advert". In 2005, they announced Elton was thinking about his next album "he could deliver a rock and roll beat album learning to play a bit of guitar", for the ocasion, he could have a teacher, Burton Dale, recommended by BB King. Also, in 2006, Elton discussed "changing his red piano up on ebay to raise founds for a pink piano", the reason was "he believes is more soothing".
by Jackrabbit on 3:19 pm No comments: