The Story Behind "Funeral For A Friend / Love Lies Bleeding" 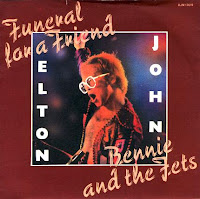 Gus Dudgeon had always said I should do an instrumental" Elton recalled years ago. "One day I was feeling really down, and I said to myself: What kind of music would I like to hear on my own funeral? I'd always liked funeral music anyway".

Engineer David Hentschel wrote and recorded the beginning organ part. He used the chords from "Candle in the wind" and producer Gus Dudgeon fused the piece with "Love lies bleeding", which was to be a separate song. The jiltedrock'n'roller "Love lies bleeding" only has words of stunned misery for a runaway love.

Though "Funeral For a Friend" and "Love Lies Bleeding" were not originally intended to go together, Elton thought it was strange to go straight from an instrumental into "Candle in the wind", then "Bennie and the Jets", then "Goodbye Yellow Brick Road". So he took this rock song "Love Lies Bleeding" and, noticing that he could easily connect the two in the key of A, he stuck them together.

Since this is about 11 minutes long, it was not released as a single. It became a very popular song on FM radio.
by Jackrabbit on 2:36 pm