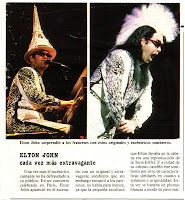 Historically, Elton has been in spanish papers or magazines more for his extravagances than for his music, specially the years when his costumes were more new than his talent. Recent years, Elton's presence in the media is consequence of his charity work. But when Elton has a new record, there's not usual to see an extensive review. Maybe that's because there isn't in Spain great musical magazines now, and the few there are don't pay the attention Elton might deserve. Only if Elton is touring, he has his half page on the paper, explaining how the concerts went on, although reviewers are not very fair with him, focusing only if he didn't play the piano as he long had or about how his voice sounded.

Radio airplay resumes, only today, his greatest hits always-the-same collection. I remember listening years ago, songs on the radio like "Country Comfort", ""Amoreena" or "Levon", or obscure tracks like "Hey Papa Legba" or "Where All The Good Times Gone". Times when Elton's soon-to-be-released recordings were aired weeks before their official release, are gone. Great radio disc jockeys, like Julián Ruiz, Angel Casas or Jordi Tardà are semi retired, or we miss people like late Joaquin Luqui. And TV's appearances are miserable. There isn't now great talk-shows in the prime time of TV, and live concerts are very little, one per week and by dawn. 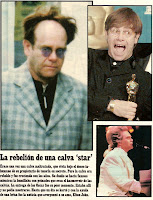 About Elton's life, all of they are traditionally respectful. Tabloids here only attack national fallen idols, but, generally, they leave the international big stars in peace. They talked and informed when Elton was married with David Furnish -can't remember his wedding with Renate-, the Diana thing, the pacemaker and hair transplants. What desperates me, is when it's the chance to interview Elton, always there are the same current and typical questions, about why he changed his name, what he likes about Spain, and if "Daniel" is a spanish boy going home. What Elton might think about those kind of questionaires!!!
by Jackrabbit on 2:16 pm