The Story Behind “I Want Love” 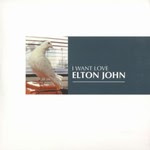 “Despite all the success, I think I just wanted to be loved. I wanted someone to love me” declared Elton with sincerity. Elton and his lyric partner Bernie Taupin had been together for thirty-five years, and passed through different periods of life: Bernie was then married for three times and Elton finally found the one.

This Beatle-esque song was only Elton and piano, and the first chords were memorable. It had great reviews: by Barry Walters for example, from Rolling Stone magazine "With its pensive George Harrison-esque guitar, Ringo-y drum thud and authentic Preston organ, "I Want Love" showcases John's hookiest chord progression in years, and the toughest Bernie Taupin poetry in decades: "A man like me is dead in places other men feel liberated," John spits out, owning every succinct phrase. Other tracks miss admirably".

Surprisingly, Elton didn’t appear on the video, his place was taken by actor Robert Downey Jr. lip-syinching while he walked around a desert mansion. Asked about this new strategy of not being involved in making videos, Elton explained: "I knew that the videos for this album were going to be important-videos are a great way of getting your music shown. So the strategy was, for each video we'd get people who are really artistic in their own right, to represent the idea of the song. I didn't have any input whatsoever, except I chose the director Sam Taylor-Wood and suggested Robert Downey Jr. for the first one, "I Want Love." After that, I wanted Sam to be totally free to do what she wanted".