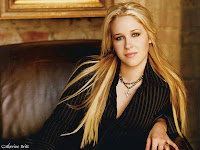 Catherine Britt, born December 31, 1984, is a country music artist from Newcastle, Sydney, Australia. She began singing in front of an audience as an 11 year old with the Steel City Country Music Club. With producer Bill Chambers, Catherine recorded “That Don’t Bother Me”, written with Kasey Chambers, that became a Top 5 hit at the beginning of 2001. Her first album, “Dusty Smiles And Heartbreak Cures” had most of the songs written by yourself, and this album received rave reviews around the world. Five of the songs have reached the Top 5 in the Country Charts - "That Don't Bother Me", "Easy Living", "46 Miles From Alice", "Hillbilly Pickin' Ramblin' Girl" and "Help Me I'm Falling". At the beginning of 2003, Catherine was signed to the biggest successful country label in the world: the RCA Labels Group in the U.S. Firmly rooted in country tradition, she gives me the enjoyable opportunity to chat with us, eltonites...

So, thank you very much Catherine. It’s a privilege and an honour for me to do this interview. I’d been looking for you for a long time, first, trying to find information about you, hearing your records, and then, excuse me the pretention, to contact you. At the end, God heard me and guided me to his angel.

Though... Your father, Steve Britt, once said you became hooked on country music after you saw the movie Coal Miner's Daughter (1980), the biopic of Loretta Lynn's life, when she was very young. Was that film the beginning, then?

Yes. That's when i realised i wanted to sing country music... i just fell in love with that storey and the music and it all went from there!!

When you were a child, you listened to Dolly Parton and Hank Williams albums as your mom, Ann, drove you to school each morning. Were those country stars whom derived the inspiration? Were you trying to emulated their singing and writing styles?

Definetly!!! i am very influenced by other artists all the time... it effects my music, how i write, how i perform... all those things!!! i just love talent...

"I'm stubborn," once you recognized when you were explaining when you walked into RCA Records, and you sat down with Joe Galante, sang him some songs, and he said, 'That's all I need." You answered "I'm not here to be anything that I'm not. I want to be a country singer, and that's my thing. I'm so glad to be here, and I feel so privileged, but it's not worth changing myself to get a record deal.' You have clear ideas, have you? Time gives you the reason...

I have always known what i want musically and who i want to be and yes, i have gotten off track a few times unfortunantly....but i never lose sight of the real deal.... making GOOD music....

You were invited onstage, first by Bill Chambers, then by Chris Isaak. With Chambers you were only eleven when you go to his first concert. What is was to tour with him in 1999? And what’s the story meeting Chris Isaak? Did you duet?

Bill and Chris are both incredible guys and huge influences on me.... i have been on the road with both of them and loved it!!! i have also dueted with both of them.... once with chris on tour and i recorded a duet with bill on my album 'dusty smiles and heartbrake cures'

One of my favourite songs of your catalogue, is called 'Too Far Gone,' that starts out with the lines, 'I know there's music playing/I can hear it in my head/I can see you lying on your bed.' What’s the story behind this incredible song? Do you captured other influences, apart from country? 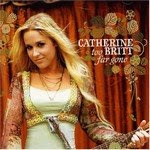 This is a song about my parents and missing home... i was very lonely when i wrote this song and it means a lot to me...i will never forget the feeling when i sing it live...

How do you met Elton? He has a good taste of music and he’s also a country fan. I heard Elton was impressed by you and extol your virtues to the press throughout his Australian tour... What do you thought when you get a call form your record company there was Elton talking about you on TV? Did he help you someway?

Elton was touring in Australia when i was 16 and came across my record and fell in love with it he then got in contact with my label to meet me and i went to sydney to see his show and meet him... he is an incredible person and i owe him so much!!

Were you an Elton fan? Do you like his songs with country influence like “Birds”, “Country Confort”, “No Shoe Strings On Louise” or “Turn The Lights Out When You Leave”?

Wow!!! How do you felt when you becoming the youngest Australian performer to ever appear on the legendary Grand Ole Opry in Nashville?

One of the best feelings in the world!!!! im so grateful!!!

Thank you very much Catherine, I will never forget that.