The Story Behind “Two Rooms At The End Of The World” 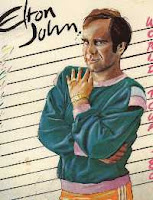 Bernie was exhausted with fame and his lifestyle and decided to take a break. After “Blue Moves”, Bernie got away from Elton and started working with other people, like Alice Cooper, for example. At Elton’s instigation, three years later, Bernie and then he’s wife, Toni Russo, were invited to Elton to stay with him in Nice, where finally Elton recorded his new album. They reconciliated and Bernie collaborated with three songs.

“Two Rooms” is an autobiographical song, chronicling while they were apart from each other, they had inevitably made contact again (“for where there’s is one room, you could find another”). Two rooms for two different lifes, in oposite sides of the world, but connected again somehow. It also refers to his songwriting method of composing in separate rooms.
by Jackrabbit on 5:27 am