The Story Behind "Les Aveux" 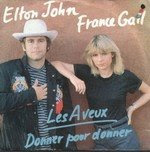 France Gall released her new album “Paris, France” with a song tribute to Elton “Il Jouait du Piano Debut” (“He Plays The Piano Standing Up”), explaining Elton’s fidelity to music and the way he attached the piano keys”. Elton met Gall and his husband, Michel Berger, in St. Tropez and decided to record a duet.

“Les Aveux” has his english predecessor, “Reach Out To Me”, but Berger wrote a new set of lyrics, talking about love, in the context of a couple lovers sharing thoughts of the strenght they expect to gain by their reunion. The single was a big success in France, topping the music chart lists, and selling six hundred thousand copies. Even its “B” side, “Donner Pour Donner”, again a duet with Gall, reached the charts and became a huge success.
by Jackrabbit on 5:29 am