Hi kissybissy. Welcome to the “Billy Elliot” Week. Nice to “meet” you and thank you very much for the acceptation. You live in a country that released a fantastic collection of singles called “Top Hits From England” and even “One Day At A Time” was an “A” side single, then in the 70s. Also, you know that, for Elton, “Billy Elliot” is a special story because he reminded his childhood and his relation with his father. I guess you like that musical too.

Well, when did you became an Eltonite? Remember the first time you heard Elton's music and what moves you to buy his music? 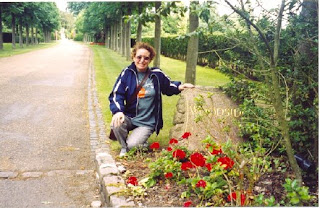 It was in 1973 when the first chords of Crocodile Rock and Daniel hit the radio waves. When I watched Elton on TV I was enthralled by his persona, his feathered suits, platform shoes. I just kept staring at the television screen, which back then was still B&W. I was only 9, so my fascination about Elton was not in the least sexual; it was only about his persona, his music, his piano playing. I didn’t understand the lyrics as I had never studied English, but it didn’t matter. His music always fascinated me and it’s the main reason that moves me to buy his music. I love his voice, his versatility, his performances. He wows an audience like no other performer and refuses to lip-synch. He’s a real talent, not a pretty face, made by record companies to make a quick buck.

I attended 5 concerts; one regular concert and four “The Red Piano”. The first time I attended an Elton concert was on July, 1st, 2004, in London at Wembley arena, one of the summer orchestral concerts. I didn’t have a good seat. Elton looked like dot on stage, but being at my first, I refused to watch the big screens. I wanted to see the man, real, live. It was a great experience, though. The excitement of being at one of his concerts, singing with him, dancing to his songs, it was an experience I will never forget. After the concert I left the arena singing his songs and I didn’t mind of people seeing me, I was happy and nothing could ruin that moment.
After four years without attending any concert, I finally went to Vegas, in March, this year, where I met some friends. The Vegas experience was the best, I have to say. Apart from spending great moments with my friends, I went to see Elton again. I had great seats and was able to go on stage twice. The view of Elton on stage is simply amazing. The feeling is hard to describe. We can see his face expression; his body`s moves. He smiled at me a few times. I could feel how pleased he was of having us there on his side. I could feel the vibration of the song when I touched the red piano. During the piano`s solos, he went nuts, pounding the keys so hard and fast that we could feel his excitement.
On his birthday, on March, 25, I was lucky enough of getting a first row ticket, in ORCH3, just on the aisle to OCH4. I was so excited. Elton was a little hidden behind the piano. I could see part of his head and his legs and feet working on the piano pedal and accompanying the beat. It was great anyway. The view I had from the first row, without having anyone in front of me is amazing, especially when Elton walked around the stage. I could almost touch him. Also, I went on stage for the second time, which was a treat!
I’ve never been in touch with him, apart from a hand shake at the end of each of the Red Piano concerts I attended, but actuallyh talk to him, it never happened. I sent him a letter to Atlanta a few years back, but didn’t get a reply. I intend to write him again and with lucky I’ll get my first autographed picture, which I long for years.

Wow!!! Then... which is your Elton's item that you really appreciate, for being hard to get or for the happiness you've got to have it?

Living in South America is hard for an Elton fan, not only because he does not perform here regularly, but also because it’s very difficult to find items related to him, except for his albums. I started working late, when I was 29, so I didn’t have money to buy any of them, before that time. When I got my first payment I bought the compilation, “The Very Best of Elton John.” I didn’t even have a CD player back then. I was living in a hotel room, as I had just moved to the South of Brazil, but I wanted so much to get one of his albums, even if I couldn’t play it. Now I have all of them, except for the compilations and live albums.
I’m especially fond of “Sir Elton” book, by Philip Norman, cause it was my first and it was the most difficult to get. When I started surfing the web, I visited all of the websites on Elton and got to know there were many books on him. However, at this time I hadn’t bought anything on the web and considering here in Brazil you cannot find any books on Elton, it took me years to get the Norman’s book, which was back then, considered the best book. Then, some years ago, I found a bookstore that imported books. It was the great find that year. I ordered the Norman’s book and when it arrived, I couldn’t stop reading it. It’s a huge book, and in less than a month I finished. When I started buying stuff from the web, I got many other books on him and now I have a cupboard full of them, lol.

Ok! Elton had such success in Brazil between 1972-1975 and his singles reached the charts. “Skyline Pigeon”, “The Ballad Of Danny Bailey (1909-34)”, “Goodbye Yellow Brick Road”, “Don’t Go Breaking My Heart”... had great success in the music charts... Have you got any notice about chart results? And now? Does radio still playing Elton’s hits?

I didn’t have access to charts back then, apart from gossips magazines, that even now and again, printed articles about him. On the radio though it was a different story, as he was constantly on, his music was always a huge hit around here and still is. It’s not difficult to go into a store or a supermarket and find an Elton song playing. He’s still very popular in Brazil and sells millions of records, one of the reasons I don’t get why he does not play here since 1995.

Great! Well, you know that “Billy Elliot”’s week. Elton said he was crying when he first saw the film of Billy Elliot because he saw himself in Billy... And what is your opinion about Elton doing musicals? Have you seen anyone? Your favourite one?

I haven’t seen any yet, but I read about them. The Lion King used to be my favorite musical of Elton, but when Billy Elliot came out, it became my favorite. It’s not that I can relate to Billy Elliot’s story, but it moved me, when I read what it was all about; a drama about a boy who wants to be dancer, but suffers because of the prejudice. It’s happens so much. It’s a real drama for many boys and girls who decide to follow a career against their parents’ will. Elton is a real example and I understand why he got so moved when he saw the film.
I think it’s great for him to be writing musicals. It gives him an opportunity of doing something different. Some fans complain that it takes too much of his time and there’s not much time left for him to write for regular albums. It may be true, but I’m of the opinion that the most important is to do what gives you pleasure. It makes him happy and enriches his musical knowledge as writing for a musical is a totally different experience from writing for albums.

Nice!!! And if an extraterrestrial come someday on earth, and wanted to learn something about Elton... What do you would explain him about Elton? And which were the unforgettable songs you let him to listen, to make him an opinion?

I would talk about his music, the man passionate about his work and that is always willing to help those in need. I would certainly let them know about his wonderful work with the Elton John Aids Foundation and how I’m proud of Elton for all the hard work he’s done.

There are so many songs, but if I had to pick just five they would be, Skyline Pigeon, Goodbye Yellow Brick Road, High Flying Bird and Roy Rogers.

I would say to all of the Elton fans around the world to never lose an opportunity of attending one of his concerts. They are the best, you won’t regret. It’s the best experience you can ever live.

Oh, once you said “I love studio albums & demos. I'm not too fond of live albums”… Why do you said that?

Because his concerts have to be enjoyed live. You have to be there, listen to the music in the arena, feel the atmosphere, the excitement, dance and sing to his songs; if you are close enough, you see his face, his expression, his body moves. It’s what his concerts are about. On the album, you miss all of the excitement; you do not hear the sound like it’s heard in the arena, you cannot see him. It’s like listening to him on the radio with a better quality sound. You miss the best part. On DVD is not the same as being in the arena either, it does not even comes close, but at least you can see the picture, which in a way makes up for the fact you are not present at the concert.

Thank you very much Ana, really a pleasure to chat with you. Very interesting things we talked on. It was an enjoyable experience for me. Take care.

You’re welcome. It was a pleasure.
by Jackrabbit on 2:57 pm

Wow, there's a Brazilian here! That's so great to see someone from my land being interviewed!

Surely this one was a great surprise for me, and I loved reading it.

Thank you very much, Mario for your kind words. I am glad you like it. Ana really did a great job. Brazil deserved an interview because that great country always have been very supportive with Elton. I thought Ana should be a good choice, and it was.

Thanks Mario. I'm glad you enjoyed reading my interview.

And thanks Jack for the invite to participate in your blog.