Nigel Olsson was born on February 10, 1949, in Wallasey, Merseyside, England. Nigel began his music career as lead vocalist for the Fireflies in Sunderland, England, where he spent his teen years. One night when the group's regular drummer quit before a gig, Nigel decided to give the drums a go, and thus began his drumming career. When Nigel was 17, he got a job as drummer for Plastic Penny group. Nigel then joined Mirage bassist Dee Murray and guitarist Ray Fenwick in a post-Stevie Winwood version of the Spencer Davis Group, touring the United States with them in Autumn 1969. Dissolved the group, Nigel joined the nascent Uriah Heep and had been performing on Elton's studio demos. Nigel became Elton's tour drummer in the Spring of 1970, forming a hot rhythm section with Dee Murray. The trio debuted at the Roundhouse in London on April 21st. Nigel was finally "promoted" to Elton's permanent session drummer in 1972 with the release of Honky Chateau.

Elton replaced Nigel and Dee in 1975 after releasing the straight-to-#1 album Captain Fantastic, and Nigel proceeded to make a name for himself as a studio musician as well as record several albums as a solo artist. In this time away from Elton, Nigel released 4 solo albums: "Nigel Olsson" and "Drummer's Can Sing Too" in 1975; "Nigel Olsson" in 1978 and "Dancin' Shoes" in 1979. 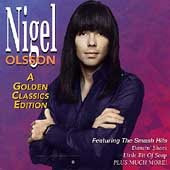 Then he and guitarist Davey Johnstone formed the group Warpipes in 1991 and they released one album, "Holes in the Heavens". Recently, Nigel began work on "Move the Universe" singing an Elton John/Bernie Taupin song: "Building A Bird": "I’m not sure what Bernie was thinking when he wrote those lyrics!" told Nigel to George Matlock Hercules Interview in 2001. "We were being dined by Elton at a hotel in New York after October’s MSG show. Davey said he remembered a song called “Building a Bird”. Elton said he had no clue about the song and asked Davey, “When did I do that?” Davey explained the song was never recorded, and then asked whether we could use it. Elton replied: “If you can remember it, go for it!” Davey had remembered the song from the sessions, and Davey made the call to Elton’s archivist Adrian Collee. It’s a great song, a big ballad".

Nigel made a big comeback on the stage of Madison Square Garden for Elton's One Night Only concerts in 2000, and now he is touring again with Elton and the band; apart, Nigel does occasional session work; donates his time to various charitable causes; and races vintage cars in California, where he lives with his lovely wife Schanda and his son Justin.

All the info and more in the fantastic website: http://www.angelfire.com/ca/nigelfanclub/albumtracks.html
by Jackrabbit on 1:39 pm