The Story Behind "Take Me To The Pilot" 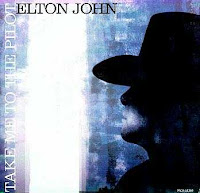 Many have cited the song's lyrics as incomprehensible. "If you feel that it's real / I'm on trial / and I'm here in your prison / like a coin in your mint / I am dented and spent with high treason" reads the first verse. The speaker in this odd tale then observes: "Through a glass, eye, your throne / is the one danger zone" and exhorts his captor to "Take me to the pilot for control / take me to the pilot of your soul."

Bernie has said that he has no idea what the lyrics mean, comparing his writing style in the song to poets like "Baudelaire and Rimbaud (who) just threw things together and went "Wow! That sounds good". The lyrics possess many elements: betrayal, either political or personal ("treason"); the illusion of danger ("through a glass eye"); and fearlessness toward the unknown ("take me to the pilot of your soul"). According to Elton, this and other songs recorded during this period were inspired by the science fiction books Bernie was reading at the time.

Since its 1970 release, "Take Me to the Pilot" has become a staple of John's live shows and can be heard on many of his concert recordings — ranging from a performance with his early '70s backup musicians, bassist Dee Murray and drummer Nigel Olsson on 11-17-70 (1970) to Live in Australia with the Melbourne Symphony Orchestra (1987) with a full scale orchestral reworking the original Paul Buckmaster score. There have also been numerous notable cover versions from the likes of Jose Feliciano, folk/blues guitarist Buzzy Linhart, R&B vocalist Ben E. King, blues icon Odetta, piano legend Nate Hopkins, a duet between singers Al Jarreau and Gloria Loring, and third-season contestant George Huff on American Idol.

from wikipedia.com
by Jackrabbit on 5:49 am