Curiosities While on Tour:

With Nigel Olsson on drums and Dee Murray on bass, that was In the Trobadour Club in L.A., and it marked his debut in America, for the first time, receiving good reviews.

He performed wearing Mickey Mouse ears on 04/12, in Anaheim, CA.

“Taupin, there’s someone I want you to meet: Taupin-Bob Dylan” said Elton. “I was just overwhelmed, I just couldn’t take it in” justified Bernie. That was on the first night at the Fillmore East concert, in 1970.

The band was kept barricaded, mobbed by enthusiastic fans.

Not talking about Clive Franks crocodile costume head, no... more than this: a live crocodile crawled across the stage. 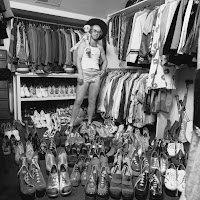 Would you want to sing?

Elton allowed drummer Nigel Olsson to sing two of his own songs during his set, that was on the 21 At 33 Tour. Before, on the Louder Than Concorde tour, Kiki Dee sang “I’ve Got The Music In Me” before the “Don’t Go Breaking My Heart” duet.

For first time, in 1989, Elton plays electric keyboard instead of piano, while he could set up to face the audience.

Part of a memorable band

Elton on piano and guitarrist Mark Knofler joined Clapton for several concerts in Japan, performing a set list including “Candle In The Wind”, “I Shot The Sheriff” and “Money For Nothing”.

In 1979, Elton collapsed on stage while singin’... “Better Off Dead”, in Los Angeles. Once, he fall off the stage while performing... “I’m Still Standing”!!! In 1987 he was forced to cancell a North American Tour with The Melbourne Symphony Orchestra because the surgery throat operation.

His most deceiving Tour was the 1989 World Tour, cause Elton's playing has slowed down and he regularly forgot the lyrics, due to personal problems and drug addiction.

Joined by percussionist Ray Cooper on their “An Evening With Elton John & Ray Cooper” in 1993, Elton started using teleprompter for first time in concert.

Performed three shows, in New Jersey, at the opening of this casino complex, in 1990. In 2004, he started a series of concerts in Las Vegas, for the Red Piano Show.

In Chicago, 9th May 2001, on the “Face To Face” Tour, and during Billy Joel's set, the band learned that Davey lost his son in an accident. John Jorgensson replaced Davey in the following concerts.

Teaching and learning... on stage!!!

New percussionist Lindsey Binolt was teached by Guy Babylon in the keyboard live parts during the set, in 2005, because he was involved on the “Lestat” production and a replacement was needed.

1989, in Philadelphia, he sang “Philadelphia Freedom” again on the encore because he claimed he couldn’t had time to rehearse another song.
1992, in Los Angeles, he sang “Don’t Let The Sun Go Down On Me” twice too, once with band, once with special guest George Michael.

“Curtains” song finished with all former and current band members names appearing on the LED, on the 30th anniversary of “Captain Fantastic & Brown Dirt Cowboy” release.
by Jackrabbit on 4:14 am