The Story Behind "Bennie And The Jets" 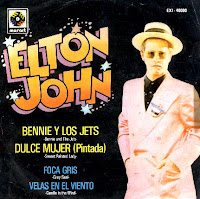 Lyricist Bernie Taupin -- the man who wrote the words for Elton John -- talked about how he turned such phrases into solid gold rock'n'roll. "I'm a title freak," explained Bernie. "My usual method of writing is by titles. If I come up with a really good title, then I'll build a song around it. I'll be walking down the street, or in the bath, scrubbing my back. I'll think of a line and say, 'Now that's good. I'll have to build a song around it.' Or, I'll just think of a subject."

Bernie has explained that the song is about a futuristic rock’n’roll band made up of identical-looking female David Bowie types, that reaches the top of the charts. It refers subtly to a “hip” early girlfriend of Bernie, Sally Bennington, “Bennie”.

In 1974, there was one subject that Bernie and Elton could hardly keep from thinking about, and that was the worldwide record industry. As the hottest single performer of the seventies, Elton got to witness and experience far more of the multifaceted music scene than nearly any other participant. He was, at once, a pop fan, record collector, record producer, performer, singer, songwriter, spokesman, musician, actor, and owner-director of his own label (Rocket Records). He was also, to millions, the logical successor to Elvis Presley and the Beatles -- a kind of bizarre but beloved musical messiah.

"Bennie and the Jets" was written as a satire, lyrically poking fun at the trendy nature of the mid-seventies music scene. Oddly enough, though, it was nearly not pulled as a single. MCA fully intended to release another album track, "Candle in the Wind." However, WJLB, Detroit's number one black station, began playing "Bennie" experimentally as an album cut. Within a matter of days, 80 percent of all phone requests were for "Bennie and the Jets." Rival CKLW then added the song, and MCA was forced to issue it as a 45.

That was in February 1974. By April, "Bennie and the Jets" was a gold record, and America's number-one hit, both pop and R&B. Elton helped that along by visiting both kinds of deejays, and making a rare TV appearance on the dance show, "Soul Train." "Bennie and the Jets" clung to the charts for more than four months, selling over two million copies.

The album it was off didn't do too poorly, either. Goodbye Yellow Brick Road remained in the LP Top 10 for three-quarters of the year. "It is like the ultimate album for me," said Elton. "It takes in everything I've ever written, or sounded like. Now I've got to start all over again."

"Hey kids, shake it loose together
The spotlight's hitting something
That's been known to change the weather
We'll kill the fatted calf tonight
So stick around
You're gonna hear electric music
Solid walls of sound

Hey kids, plug into the faithless
Maybe they're blinded
But Bennie makes them ageless
We shall survive, let us take ourselves along
Where we fight our parents out in the streets
To find who's right and who's wrong"
by Jackrabbit on 5:25 am