Welcome to "The Big Picture" Week to everyone. This was the last album Elton collaborated with Chris Thomas, the producer. Elton saw the album as a Reginald Maudlin album for its romantic and slow pieces. The album had success, maybe because it came at the time of Elton's emotive performance on the Princess Diana Funeral. To chat a little about that and about Elton's world, I have to bring a person who's an incredible eltonite... Ladies & Gentlemen, from Finland, BiteUrLip!!!

My real name is Antti Honkasalo and I live in Turku, Finland.

Right! When did you became an Eltonite? Remember the first time you heard Elton's music and what moves you to buy his music? 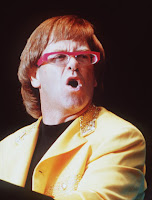 I became a fan when my father bought his Greatest Hits 1970-2002 UK Bonus Edition to my mom at Christmas about six years ago or so. I didn't listen to any music back then but this compilation changed my life - the first favorite Elton song was "The One", and it still is one of my favorites although not the most favorite one. First I started to collect other famous artist's compilations too, and took long before I started to buy Elton albums. But why exactly Elton? Because he simply IS a composer genius, and his catalog includes so many great melodies/hooks and music styles that it's really amazing. I have all his albums in cd-format except Leather Jackets, and also a couple concert DVD's. ;)

Great. What was it like seeing Elton for the first time and how many concerts have you been? And also, could you tell us if you ever have been in touch with him, get a signed autograph or even, speak with him or with other member of his band?

I saw Elton the first time during his Peachtree Road tour in Turku. He played the most usual hits in that one, but also a few songs from Peachtree - "Answer In The Sky", "They Call Her The Cat" and "Turn Out The Lights When You Leave". It was a good concert although I wasn't fully able to enjoy of it - I didn't eat well before the show and that a bit spoiled the event. But still it was a good concert and I was happy to see him live with my own eyes. When he opened the show with "Your Song" it was a really emotional moment. After the concert I sent a short review of it to ej.com and it became published!! I was very happy because of that although they removed the few critics I wrote too :p

Even more amazing than that however is that I believe I was the fan behind the idea of a sequel to Captain Fantastic - I remember I made up the idea of it somewhere shortly after the release of Peachtree Road and sent a message to ej.com about it. I didn't write very much, a few sentences like "what would you think about a sequel to Captain Fantastic?" or "Elton and Bernie definitely should have many stories to tell", and I don't think that they replied to that message. But afterwards I was very amazed to notice that they took the idea, and really believe it could've been originally from me. :) That's why it would be cool to meet Elton some time (if possible) and ask about it from himself.

Wow!!! And which songs do you think Elton should add to his current set list, and what would it be life if Elton suddenly played a song that he has never played live? And your favorite live songs to be on? And, for you, which member of the band is (or was) irreplaceable? Miss someone, now?

Well I personally think (and I believe that many other fans too) that he should really get out of the seventies and take a look at his vast catalog of songs throughout the years... song like "White Lady White Powder", "Healing Hands" or "Original Sin" would all be great to hear live. About his live songs it's easier to say what are not my favorites... like "Bennie And The Jets" where I really miss the Here & There -typic performance. "Philadelphia Freedom" is another song that I think doesn't work very well live. But after all I think it's really more about luck... sometimes the band plays better, sometimes worse. That's it.

About band members would definitely like to get John Jorgensson back, his a great multi-instrumentalist and would fit well in.

Ok! And which is your Elton's item that you really appreciate, for being hard to get or for the happiness you've got to have it?

My most precious Elton item is the black & white mug I bought as a souvenir from my debut EJ concert. I think that was really a cool choice - I've been able to advertise Elton with it quite a lot. :p
On the other side of the mug there is a text "Elton John" with black on grey letters "ej". The other side has a black picture of young Elton with sunglasses. The picture is from the times of his self-titled album.

How it was, and still is, the success of Elton in your country? Which have been his hits in sales terms? And which are Finland's favorite Elton's albums or songs? And could you still hear Elton's music in the radio, nowadays? And which should do Elton's next step in his music career?

I think Elton hasn't been very succesfull here... and been better rather in countries like "Sweden". Finland is so much around heavy metal nowadays... that doesn't leave much room to anything else although I know that other styles are liked much too. Elton's most popular songs here are probably "Crocodile Rock", "Candle In The Wind" and "Can You Feel The Love Tonight?". Something like "Island Girl", "Philadelphia Freedom", "Someone Saved My Life Tonight", "Nikita" or "The One" are sadly those which are not known. And definitely not my title song I bet! :p

I see... Well, you know this is “The Big Picture” week. And it was 1997, the “Candle in the wind 1997” thing. What do you think about the rewritten song, for Princess Diana? And Elton’s performance? Or do you prefer the 1973 original Marilyn Monroe’s version, or the 1987 live version with the Melbourne Symphony Orchestra?

I don't remember quite anything about the event as I was quite young back then... but today when thinking about it, in my opinion it was a great idea to redo the song again. I bet that helped many people survive from those tough times, and of course created the biggest-selling single at the same time... ;)

The best version of the song for me is however definitely the live 1987 Australian live version. Instrumentally it is very well done and Elton sings with big passion. The original version deserves full points too. The 1997 version is a bit boring to me because of the arrangement, although the new lyrics of course are great.

In the perspective of time... what do you think about Diana’s song in Elton’s career? And without that... “Something About The Way You Look Tonight” and “The Big Picture” album, would they be the hits as they were, in your opinion?

It of course helped to spread the A-side around without a doubt... and maybe improved a little the sales of The Big Picture album. But in the long time run I think the single didn't have very much effect to his new songs/albums popularity. But at least that made him more respected as an artist, at least for most of the people.

Yep, I know they will change and this is hard, but I will give credit for songs that are not so often seen in here. Also gotta remember my first Elton John song favorite, "The One".

Well, it has been really great to hang around the Elton fan communities with cool people so all I can say is...