The Story Behind "Candle In The Wind" 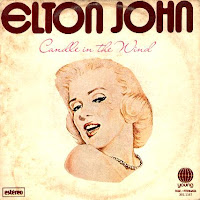 "Candle in the Wind" is one of Elton's best-known classics. It's really sad because it's dedicated to Marilyn Monroe. The song took its title from a newspaper cutting that was about the death of Janis Joplin, but the sentiment was for Marilyn Monroe.

Bernie wrote “Candle in the wind” to illustrate how the Hollywood Star system could destroy that which it so desperatly sought to create. In the lyrics, Bernie tried to convey his belief that people fell for Marylin not because she was a sex object, but because they saw her vulnerability and wanted to comfort and protect her. “I wanted to say that it wasn't just a sex thing. That she was someone everybody could fall in love with, without being out of reach” explained Bernie.

“Candle in the wind” was released as a British single in February 1974, making number eleven in the charts. In January 1988, he had had a surprise single hit with his live Australian concert version of the song, which made number five in Britain and six in America.

For years, it has been the farewell encore of every concert, moving the audience to strike matches and cigarette lighters, and hold them aloft as in one huge, dark altar of frailly flickering candle flames. In Elton's words: “It's the only song I've ever written where I get goose bumps every time I play it”.

Elton sang the song, a personal favourite of Princess Diana Spencer, at her funeral. Months earlier Elton had cradled the princess in his arms at the death of their mutual friend, designer Gianni Versace. Who first had the idea that popstar Elton John should sing at the funeral service will never be absolutely clear: Diana's elder sister Lady Sarah McCorquodale, or Virgin tycoon Richard Branson, a moving spirit in the funeral organisation. The number that Elton first considers playing was “Your song” but one whose first line “It's a little bit funny...” may not be quite suited to present circumstances. At least, Elton phoned Bernie in America and asked him to rework the lyrics of the original 1974 song. The Royal family have indicated that they are special uncomfortable with the original line “Loneliness was tough, the toughest role you ever played (...) Even when you died, all the press still hounded you (...). After only a couple of hours, he faxed the new lyrics to Elton, which in turn faxed them to the Prime Minister and Diana's family for approval. Numerous people protested that the song should not call Princess Diana “England's rose”, sice she was princess to the people of Scotland and Wales too. But the lyrics remained as written.

The best-selling single in the history was this Elton's "Candle in the wind 1997" tribute to Lady Diana Spencer, bringing 1 multiplatinum, six platinum and 19 gold.
by Jackrabbit on 2:16 pm