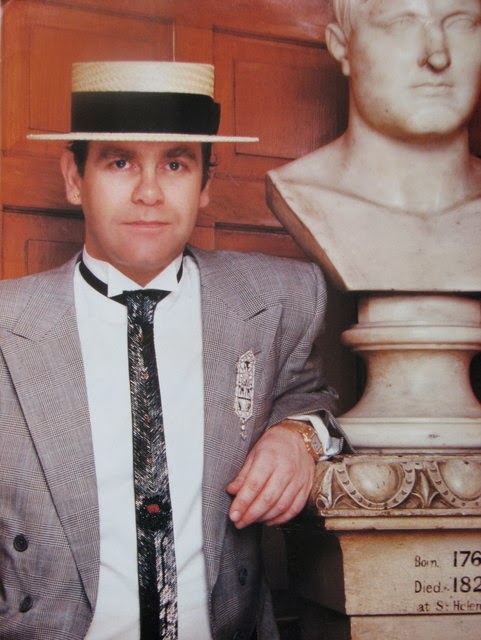 1984. Someplace at home. On my sister's radio is playing again that song. Could I understand clearly now who's the singer of that beatiful song? Finally, "I Guess That's Why They Call It The Blues", by Elton John. That was the first time I listen Elton's name. This singer has something different to the others I had listen. I love his piano playing, his voice, and the song. At that time, at school, we were learning english. Reading Bernie's lyrics was a way to learning english too. I remember going to the record shop and buying his last album: "Breaking Hearts". I ran to home and I played the LP but this song was not in there. So strange! I felt in love inmediatily with "Sad Songs (Say So Much)", on the radio airwaves too, "Passengers" and "In Neon". On the library I was searching about Elton. That's it: the song I was searching was in the previous album: "Too Low For Zero". So I bought. Two records on a row. Weeks after, I went to buy another album and I left the record shop with two albums on my desk: "A Single Man" and "The Superior Sound Of Elton John (1970-75)". I thought about buying a recopilation album of Elton's seventies period and I thpught that could be enough. No it wasn't. That was precisely Elton's best work to date. And the others albums were bought one by one.

Everyone of us have our own story of being an Eltonite. That was mine. I felt in love with Elton, for his music, for his dresses, for his glasses, for Bernie's lyrics. Then came "Nikita" and Elton got me forever and ever. It was quite difficult to get Elton's records in my hometown. Records came from Barcelona and only the newest were easy to get. Asking some album of Elton's catalogue got weeks to arrive. It doesn't matter. Elton's music became the soundtrack of my life, still is. Best moments of my life, the hardest moments of my life, the love, the pain, ... every situation has an Elton's song for me. I couldn't ever forget the first time I saw Elton's live. It was in Barcelona and I managed to buy two tickets, one for me, one for my best friend. We went to Barcelona without parents permission, in fact they thought we were at school or making homework in one friend's house, but not. That was for the Breaking Hearts tour. When Elton appeared on stage, we on front row, I could tell I was a bit disappointed, it was like seeing Elton was real. yes, that's silly, but it was hard to see Elton's videos on TV, his songs on the radio, Elton was not so popular in Spain now (it was the pre-Sacrifice Era), and I mistify Elton. So, at concert, we lose the train to get back home and had to phone home. "What are you doing in Barcelona?". I couldn't go out weekends for a month or two. It was insane, but that was not the first time I made something crazy for Elton. Everyone who knows me, knows about my Elton's passion. Even they call me if Elton comes to concert or about an y illness he has suffered over the years. Elton is so familiar at home. My grandma and grandpa love his songs, even he couldn't understand anything of his singinig for the language. And my mother has some of his records! 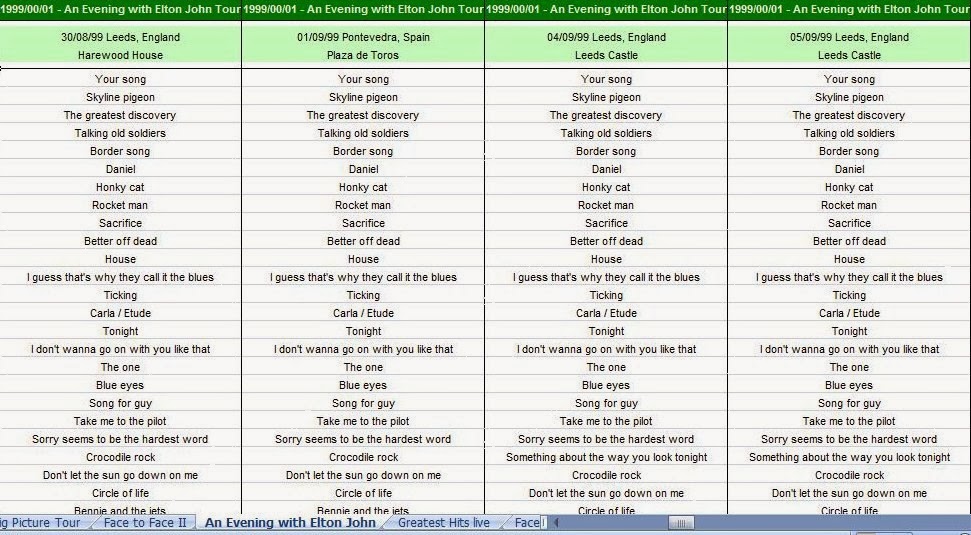 My passion about Elton began then, in 1984. Also, I was a fanatic, still I am, of statistics, and particularly, about music charts. I was so angry about Elton's music were not at spanish charts. So, I made my own chart about Elton, with only Elton's songs. That was the beginning of AllSongsList. Since then, since 1984, each song have had their punctuation. And, since then, songs have gone up and down to charts, mixing the new ones with the old ones, the songs on records, the songs singing live. I began to collect articles, people began to bring me anything related to Elton, and AllSongsList began to grow up with set lists and concerts, music charts all over the owrld, covers, duets, albums, singles, videos, etc. 30 years collecting anything related to Elton. It's true internet changed everything, and made much easier to get information than then.

So what's AllSongsList? Apart of being an extensive archive of Elton's songs, is a list of more than his 1.000 songs he have sung or played along his career, each song with its scores. The list is trying to find best Elton's song of his career. The list, also, has 26 categories. We've got the chart results of the following countries: US, Canada, UK, Ireland, France, Germany, Italy, Austria, Switzerland, Holland, Belgium, Spain, Norway, Sweden, Japan, Australia, New Zealand and SouthAfrica. The scores goes depending the category of singles, "B" sides, or albums. For example, a Nº 1 means 10.000 points if it was reached as a single, 2.500 points for its "B" side and 5.000 points for the album (Elton's album or another artist album). That is ponderate by the importance of the country in world's music sales terms. And it is increased by the award acreditation of platinum, gold or silver albums. 100 points are for the weeks in the number one chart and 50 for weeks in other positions. 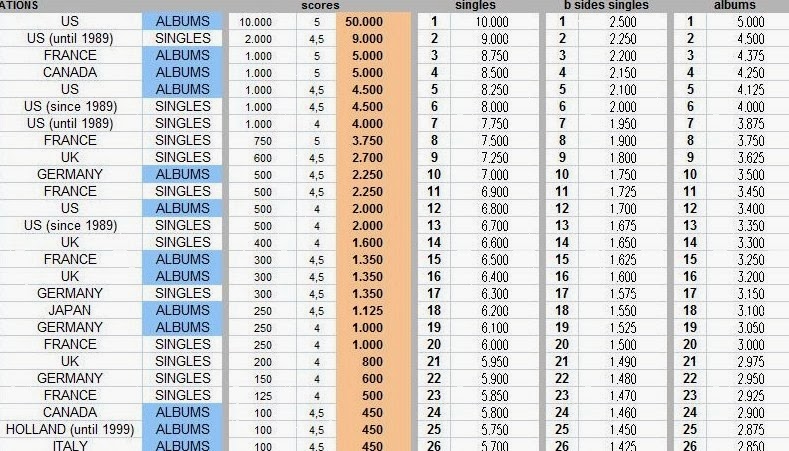 More categories of the list comprises: "Singles" category, counting for the "A" singles (500 points) and "B" singles (250 points); "Albums" category, 500 points if it is an original album and 750 points for the compilations. Soundtracks and other artist albums are counting as 500 points; "Videos" category counts 750 points for the video-clip singles and 500 points for being in a original release; on "Covers" category 650 points means an artist cover of one of Elton's songs and 350 points are for the mixes and remixes; on "Live" category the scores counts 1.000 if the song was in a Tour Set List and the points are increased by 100 for the times the song is played, also, 850 points for a song means to be in a guest appearance concert or special show or event (outside the official tour). The list also provides "youtube" views and others puntuations depending if the song win an award (grammy, brits, etc.) or for the nomination; for the duets, other chart lists of magazines, the radio airplays or TV appearances. Finally, and one of most important parts, Eltonites votes all over the years. That was born in order, as I said, to find Elton's best songs, and trying to be as objective as it coulds. 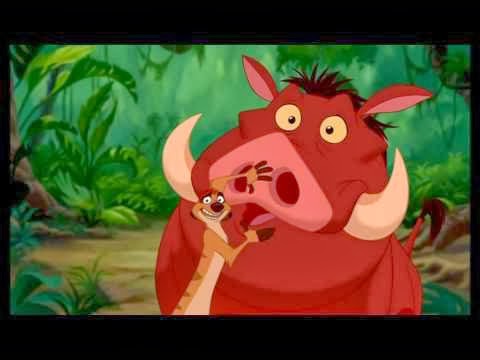 And now? well, since February to September, when the first list was born, thirty rellevant eltonites will publish on the blogsite their own list of songs, in running order, 30 songs (for the 30 anniversary obviously). Eltonites I've been in touch kindly agreed to do this for the event, and that makes me feel so proud. The blogsite allowed me to meet very good friends, very good people. That's the magic of internet, of the music, of Elton. I couldn't ever imagined, when I started, that one day I could be in touch with eltonites around the world, travelling with them, joining them for some Elton's concert, and also, sharing experiences and items with them. Eltonites, you makes me feel so privileged to have known you. I would like to thank your gifts, messages, letters, information, and, specially, your love and support. On September we will celebrate the event with something special, I couldn't explain now, and surely it will be the end of the list and everything. Jack Rabbit has been running since a long time through the woods and as the song says..........