The Story Behind "Daniel" 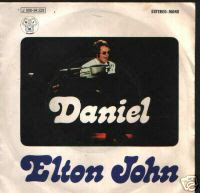 "Daniel" is a the grown-up ballad about a dissillusioned Vietnam veteran and was inspired by an article Bernie had read in Newsweek magazine."

Daniel had been the most misinterpreted song that we'd ever written" explained Bernie in the "Two Rooms" tribute project. "The story was about a guy that went back to a small town in Texas, returning from the Vietnam war. They'd launded him when he came home and treated him like a hero. But he just wanted to go home, go back to the farm, and try to get back to the life that he'd led before. I just embellished that and like everything I write, I probably ended up being very esoteric, but it is a song that is important to me, because it was the one thing I said about the Vietnam War. I wanted to write something that was sympathetic to the people that came home".

However, the cryptic lyrics left everything to imagination. One early conjecture, which Elton and Bernie found hilarious, was that it was about a homosexual relationship.Unfortunetly most of the details came in a pay-off last verse which Elton, as sometimes his wont, had arbitrality cut out. "The last verse explained everything but it just made the song too long" replayed Elton to Bernie on that same interview. "Daniel's nobody" told Bernie to "Rolling Stone" newspaper. "I don't have any set idea on who he is. I just started the song with that corny rhyme "plane" and "Spain"".

But guitarrist Davey Johnstone told the story: "Elton had written this song which inmediatily we all loved. And he call me over and said "look at this last verse, I think Taupin's on drugs. He must be taking acid or something". And we looked at this verse, and I can vaguely remember something about a ship's dog named Paul. And I'm like "What the fuck is he talking about?" Suddenly out of nowhere he starts talking about this dog. So Elton just kind of took the page and ripped that bottom part off very slowly and very definetely and said "Well, that's the end of that". And that's why that verse was lost". (EEL #35). 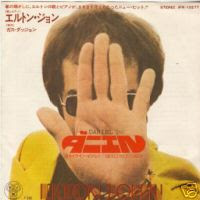 Elton and producer Dick James argued over the prospect of it being a single. James and MCA record company felt it would be a marketing disaster as the album's first release (they chose "Crocodile Rock"). Elton then insisted and James relented, which Elton vowing to pay promotional costs if the song flopped. Daniel at last reached number 4 in the UK charts and number 2 in the US.
by Jackrabbit on 2:13 pm