The Story Behind "Crocodile Rock" 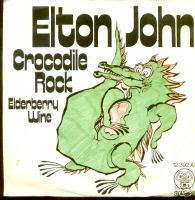 Elton's own music is often a tribute to those he has been influenced by. As a pianist, we could count Winifred Atwell, Ray Charles, Fats Domino, Jerry Lee Lewis (“the best rock and roll pianist ever” in his words), Little Richard and Leon Russell.

“Crocodile Rock” for example was a bubble-gum rock'n'roll parody, on which he brought together snippets and strains from a multiplicity of sources reminiscent of his childhood, including Billy Halley, Bobby Vee and Eddie Chrocane. Elton's high-pitched “la la la” chorus caused the authors of Pat Boone's 1962 hit “Speedy Gonzales” to file suit, claiming the song infringed on their copyright. And the organ at the beginning of the song pays homage to the farfisa sound of Johnny & The Hurricanes. 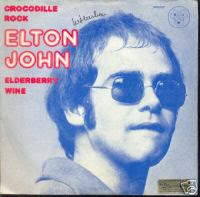 “I don't consider myself a rock'n'roll artist” explained Elton in a late interview. “I consider myself now a singer-songwriter who plays the piano, which is probably always I've been”. It's difficult to define Elton's genre. He was an excellent piano player at a young age and he won a scholarship to the Royal Academy of Music when he was just 11. With two A-levels added to his four O-level passes, he could have competed for admittance at several redbrick universities, if not the Royal Academy of Music, but his decision was to leave school in early 1965. He formed a band “Bluesology” and he also sat in on countless sessions by top pop and rhythm and blues acts recording in London in the middle-to-late sixties.

Bernie Taupin, Elton's lyricist, describes their style as a diversity: “To our credit, I don't think that there's anybody who came up at the same time as us who has been more diverse than us. We've tried everything, not always done it well, but at least it's been interesting. We've done country songs, we've done blues songs, we've done pure pop and we've done reggae”.
by Jackrabbit on 2:09 pm