The Story Behind GYBR: The Rest Of The Songs 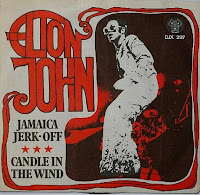 This Song Has No Title
It deals with Bernie's early discovery of his poetic talent, as well as his doubts and the contradictions of life.

Grey Seal
This rerecorded 1969 single side was definated by Bernie as a "very oblique song. I hadn't a clue what I was writing about. It was just images" as he did in his early stuff.

Jamaican Jerk-off
It was a celebration of sun and music and island indolence. "Were not having a go at Jamaica" a worried Bernie said about the title, "it portrays Jamaicans as carefree, a dichotomy between travel brochures and reality", explained. Who was credited as Prince Rhino in vocals interjections, may seem Elton himself.

I've Seen That Movie Too
It tackles the break-up ballad genre from a unique angle by using movie references as to create an elaborate metaphor for a love affair grown cold: "So save your audition for somebody / Who hasn’t got so much to lose / ’Cause you can tell by the lines I’m reciting / That I’ve seen that movie, too." The result is a ballad that is as elegant and timeless-sounding as the movies it pays tribute to. "I’ve Seen That Movie Too" was never issued as a single but has become an enduring favorite with Elton John fans, including Axl Rose - who name-checked the song in the Guns ‘N’ Roses hit "You Could Be Mine."

Sweet Painted Lady
This tale of sailors and prostitutes, lyrically, its style honors Noel Coward. Set in a port city, sailors on leave search for a good time.

The Ballad Of Danny Bailey (1909-34)
It's a down-home gangster tale Bernie had in mind, written with a cinematic feel. The lyrics lay out a romanticized eulogy for the fictional title character, a Robin Hood-like gangster being mourned by the backwoods folks who loved him: "So mark his grave well, ‘cause Kentucky loved him / Born and raised proper, I guess life just a bugged him / And he found faith in danger, a lifestyle he lived by / A running gun youngster in a sad, restless age." The lyrics also note the end of gangster era with lines like "Dillinger’s dead / I guess the cops won again."

Dirty Little Girl
Inspired by The Rolling Stones, it provoked claims again of Bernie's suposed misogyny, for this story about a homeless woman who hangs around outside a man's house.

All The Young Girls Love Alice
This tale about lesbians may be a tongue-in-cheek reference to musician and friend Alice Cooper. Elton commented in then interviews young girls' reactions to Cooper in concerts. Album-oriented stations gave this song a strong airplay.

Your Sister Can't Twist (She Can Rock'N'Roll)
A musical hats-off to The Beach Boys telling of a blues-obsessed youngster turned on to Rock'n'roll by a friend's sixteen year-old sister. 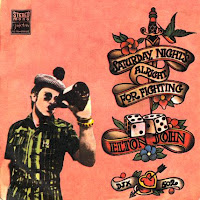 Saturday Night's Alright (For Fighting)
Taupin called it his "first attempt to write a Rock And Roll song that was totally English." Until then, most of his songwriting focused on American culture. The song found Elton revamping old-time rock & roll with the panache of glam and the sound of the Who and the Rolling Stones. The song is about Taupin's teen years going to British dance clubs, where fights were common, with people ready for a night on the town with a bellyful of beer.

Roy Rogers
A tribute to American's icon played on "The Roy Rogers Show", what was a black and white American television series that ran for six seasons from December 30, 1951 to June 9, 1957 on NBC, with a total of 100 episodes. Roy Rogers, had his golden palomino Trigger, and his German Shepherd Dog, Bullet, along with his wife, Dale Evans. Roy Rogers and Dale Evans were simply the most popular cowboy and cowgirl the world has ever known.

Social Disease
The lyrics tell of an alcoholic who pays his rent with sexual favours and liquor.

Harmony
It expresses Elton's lifelong love affair with music.
by Jackrabbit on 1:41 pm