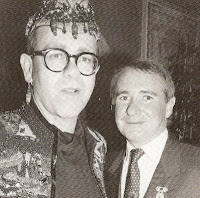 John Reid, born in September 1949 in Paisley, Scorland, had a five-year personal relationship with Elton in the Seventies, from 1971 to 1975, and was his manager for 26 years until his contract was terminated in 1998.

Young Reid rapidly prospered, becoming EMI's label manager for Motown's distribution firm. Reid knew Elton in EMI corridors, when Elton & Bernie's early compositions had been covered by EMI bands, and became friends, as they were avid collectors both. Reid entered Elton's complex social circle shyly and diplomatically, and established an instant rapport with Elton's family, especially with Elton's mother. Maybe not with Bernie: "When John would come and meet him (Elton), I'd usually get up and dissapear, just to leave them alone" had said. Elton insisted to Dick James that his new partner had to be his manager, instead of Ray Williams. Dick James said "Oh, well. If he's living with his manager, at least he'll have someone to get him up in the morning".

Elton and Reid had in 1975 almost ended their domestic phase of relationship, each had his own separate life: one in London, Elton in L.A. John Reid set to work organising Queen's affairs, and became the manager of Kiki Dee, Simple Minds and Dame Edna, among others.

Reid has been known for his sometimes uncontrollable temper, which landed him in jail several times. He has gotten into many highly publicized fights, verbal and physical, with members of the press in an effort to defend clients such as Elton John. In Australia, he is best known for being a judge on the local version of [The X Factor].

Working for the star for nearly 30 years had left him "disenchanted" and the singer's extravagance and disregard for advice meant he was ready to walk out despite the huge amount of money he was earning. According to BBCNews, Sir Elton responded: "You have never trusted anyone as much as I trusted John Reid." It continued: "Sir Elton John once spent £30m in just under two years - an average of £1.5m a month, the High Court in London has heard. The singer's lavish lifestyle saw him spend more than £9.6m on property and £293,000 on flowers between January 1996 and September 1997". "I am a musician, not a businessman or accountant," John said in a statement. "I have always had to rely on other people to protect my interests, and I am deeply disappointed that people I have relied on in the past have let me down so badly. I shall now leave the issues of the past in the hands of my lawyers, and I will be looking to the future and continuing with my work." Elton lose the court case.
by Jackrabbit on 3:29 pm