"My Life In Music" A Must Have CD 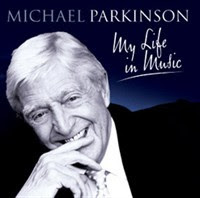 Michael Parkinson (born March 28, 1935, in Cudworth, near Barnsley) is an english journalist and television presenter. He is most famous for presenting his eponymous interview programme, Michael Parkinson Talk Show. Parkinson, shown BBC One, initially ran from 1971 to 1982. It was revived in 1998. A parallel Parkinson series was shown in Australia between 1979 and 1982. Parkinson was ranked 8th in a list of the 100 Greatest British Television Programmes.

Parkinson began as a journalist on local newspapers, and his Yorkshire background and accent remain part of his appeal. He worked as a reporter on the Manchester Guardian and later on the Daily Express in London. He also did National Service as Britain's youngest army captain and was involved in the Suez Operation.

In 1999 he received an honorary doctorate from the University of Lincolnshire and Humberside. He was invested as a Commander of the Order of the British Empire in November 2000 for services to broadcasting. His autobiography- Parky – was published in October 2008.

In 2000, it was a memorable show when Parkinson read some words which researchers have written following Elton's mother's current plight on the River Thames with rising flood water. The words Elton had never before seen. Parkinson read them out once, and asked Elton to perform a song: that was "The Flood Song".

The Flood Song
By Michael Parkinson and Elton John (improvement!!!)

"Mothers dear mothers our love flows for you
Like rivers that course ever true
The banks they have burst with the downpouring rain
And there's something unpleasant, it's blocking the drains.
The carpets are soggy, where is poor moggy?
The carpets are soggy, and where is the capt?
We're trying to reach you, and the boat's on the way
But the skipper's found a pub, that's caused a delay
Keep filling those sandbags, keep stacking them high
And we'll be right with you once we've sucked this place dry!"

"That could be a single" said Parkinson while Elton added: "Don't get any ideas! The Lion Queen, written by Michael Parkinson and Elton John." Elton ended the show on Parkinson's favourite Elton song, "Rocket Man" on his request. Actually, this is again Elton's song, Parkinson selected for his upcoming CD.

Parkinson chose a great collection of tracks from "Moondance" by Van Morrison, "Downtown Train" by Rod Stewart, "Because Of You" with Tony Bennet & KD Lang or "Sometimes I am Happy" by Nat King Cole, to name a few.

The 2 Disc CD, available for PRE ORDER, will be released on 3rd November. It costs only £15.99. And you could get signed CDs to the first 100 who pre-order. That's here:

Also there's the chance to win a brand new ipod pre-loaded with all the tracks from the album and signed copies of Parkinson's book and CD.
by Jackrabbit on 6:17 am