Born in the Bronx, New York, Joel was raised in Hicksville, New York. His father Howard (born Helmut) was originally from Germany, where his father (Billy Joel's grandfather) Karl Amson Joel had owned a department store which he was forced to sell under value to avoid being dispossessed by the Nazis. His mother, Rosalind Nyman, was born in England, to a Jewish family (Philip and Rebecca Nyman). His parents divorced in 1960, and his father moved back to Vienna, Austria. Joel signed a recording contract with Columbia in 1972 and moved to Los Angeles. He lived there for three years, returning to New York City in 1975. While in California, he had a paying job in a piano bar (using the name Bill Martin), so his superhit "Piano Man" is seen as autobiographical.

Billy insisted Elton never infuenced his music, but recognise in the issue of the 1976 Juke magazine: “Elton has definetely repopularized the piano as a lead rock instrument”. He didn’t like the comparison with Elton although he like him. In fact, they professed mutual admiration and always offered kind words to each other. In 1994 Billy covered “The Bitch Is Back” in Wembley Arena, and then Elton appeared onstage to lead the crowd in a “Happy Birthday” sing-along rendition for his forty-fifth. Competition or not, the camaraderie between them was evident, when Elton’s drummer Charlie Morgan replaced Billy’s Liverty DeVitto, due to illness: “Billy presented me a card and wrote: “thanks Charlie, you saved our asses”, and taped a $1.000 dollar bill” explained Charlie in an interview for the “Elton The Biography”, by David Buckley, a must to read book. 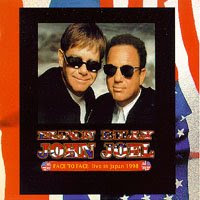 It was Billy Joel’s idea to tour with Elton and approached to him: “Is this a cool idea or what?” exclaimed Billy. First leg, in 1994, in America, it became the second tour grossing $224,157 per show, only behind Barbra Streisand. Each performer did a set with his own band and then, singin’ together in the opening and the final of the show. In his own set, they exchanged songs: Joel did “Goodbye Yellow Brick Road” and John did “Uptown Girl”. When the two bands jammed late in concert, Elton and Billy storming through songs that inspired both musicians. The success of the shows convinced them to bring the tour to Europe in 1998, along to Japan and Australia, but some of the concerts were performed only by Elton and his band, due to Billy’s respiratory infection. The last leg of the tour was in 2001 and 2002, in America again. It was during Billy's set in 2001, in Chicago, when Elton’s band learned that Davey lost his son in an accident.

In 1995 Elton and Billy collaborated on the song “Red, White And Blues”, expected to be on a compilation but still unreleased. Billy was an special guest of Elton’s “One Night Only”. It was said too that Billy would be in Elton’s “Wouldn’t Have You Any Other Way (NYC)”, on “Captain And The Kid” but finally this not happened.

EJ and BJ, as they jokingly referred to themselves, are two of only musicians who can actually both read music and play by ear.
by Jackrabbit on 2:29 pm