The Story Behind "Wrap Her Up" 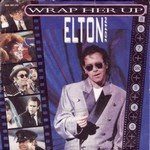 According to producer Gus Dudgeon, Elton planned to use Roy Orbison’s “Dream Baby” as the backing track and even it was recorded, but George Michael insisted Elton to write his own music tune. Bernie’s lyrics, then, alluded the joys of admiring the female sex. George Michael took the high notes in the duet, and Elton the low notes.
by Jackrabbit on 1:07 pm