The Story Behind "Nikita" 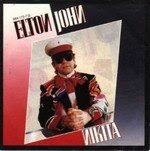 Nikita was said to be inspired a cluster of mums in Essex to name their little girls Nikita at that time. But in fact, Nikita is a russian male name. The song made a compelling case against the Cold War that president then, Ronald Regan, dubbed about what he considerate the evil’s empire: the Soviet Union. Elton toured Russia in 1979 and had experienced the warmth of the Russians firsthand.

Ken Russell’s video showed capitalist Elton behind the Wall, in his Rolls-Royce, playing a lead romantic role, and admiring a caucassian female border guard, while hoping and dreaming the Wall come down sometime to be finally with her. The blond caucasian beauty in soviet uniform was Russian singer Anya, she's appears on Nikita video. Anya is the Russian form of Anna which means "gracious".

Elton won an Ivor Novello Award with this song, and he said he could knock out a song like this every day, though he would not want to, as he has to be in the mood. To help Elton along he brought in some new pop talents stars like Nik Kershaw on guitar and George Michael singing beautiful soaring backing soprano.
by Jackrabbit on 11:09 pm