The Story Behind “You Gotta Love Someone” 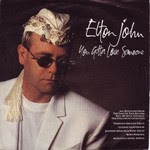 Recorded in Los Angeles, July, 1990, and was produced by Don Was. Reportedly written with Ryan White in mind, with a gospel-like tune, the song seem to hold personal reference to Elton too, putting love above all: “You can beat the clock, but before highnoon, you gotta love someone”. Elton, in fact, decided to change his way of life after Ryan’s death.

On july, before entering to treatment in a Lutheran Hospital in Chicago for multiple addictions, Elton was asking Iggy Pop about working with Don Was. Next, he recorded some of the songs he and Bernie penned, most in one take, and at least, eight songs from this session remain unreleased. A different mix of the track was featured on “Days Of Thunder” Soundtrack.
by Jackrabbit on 1:42 pm

Thank you for your post on the Don Was Sessions of 1990. "You Gotta Love Someone" is my favourite of the 4 released songs from these sessions. And how great it is!
Considering that they were recorded between two great Elton albums of the era, "Sleeping With the Past" and "The One", makes me believe that the 8 unreleased songs should be great, too.
But then, considering all that exists of these songs is one single take each, they might be a bit too underdeveloped to have been considered for a release.
But who knows? Probably only Elton and Don Was themselves.

All the best
and thank you for your great blog
Yannick, the GeneralEclectic

Thanks very much for your comment, Yannick, and for your kind words. I also loved that era, and I hope soon I could tell more about those sessions with Don Was ;-)