Reginald Kenneth Dwight was born in Pinner, Middlesex, England on March 25, 1947. Reg's father Stanley, a squadron leader in the Royal Air Force, he wanted his son to be a Royal Air Force pilot or a bank teller. Since Reg's father was away most of the time, he was raised primarily by Sheila his mother, grandmother and aunt. "When I was four, Ihad a mass of bubbly hair. I looked like Shirley Temple" explained Elton years later. "As a child I desperately wanted brothers and sisters. But my father was against the idea. (Childhood) was miserable. I lost touch with my father. There was a wide-right between us. My father seemed to resert me. Maybe it was a mistake. I don't know..."

It was his grandmother Ivy, who first encouraged young Reg to play, picking him up, in her knees, when he was no more than three. One day he astonished her by suddenly starting to pick out the melody of "The skaters'waltz". He soon began taking piano lessons at the tender age of 4. The marriage between his parents did not last song: Stanley and Sheila Dwight divorced when he was 14. His mother married Fred "Derf" Farebrother ten years later, and moved into an apartment in Northwood Hills, England. "I was two years old when he came home. Mother said "Do you want to see him?" He said "No, I'll wait till morning". He'd been in Aden or somewhere, and he came home after two years, after not seeing me born or anything" regret Elton.

Reg was an excellent piano player at a young age, he won a scholarship to the Royal Academy of Music when he was 11, but he continued his schooling until he was 15, when he left school with the intention of breaking into the music business. "I began wearing glasses when I was 13 to copy Buddy Holly. After 18 months I found I couldn't see without them" he recalled. Elton remembered when "My mother came hom one afternoon with two discs. They were Elivs Presley's "Heartbreak hotel" and Billy Haley's "ABC Boogie". I really freaked when I heard them and I went on from here".

In 1960, Reg and his friends formed a band called "The Corvettes". In 1961, he joined his first serious band, "Bluesology", and divided his time between playing with the group, giving solo concerts at a local hotel, and running errands for a London Publishing house. Bluesology only lasted him a year, but gave him the name that stuck since: Elton John, which was taken from the names of "Bluesology" members "Long" John Baldry and saxophonist Elton Dean. "Reg Dwight was hopeless... it sounded like a library assistant" reminded Elton. In 1967 Elton quit "Bluesology" and teamed up with lyricist Bernie Taupin, a poet from Lincolnshire, who was interested in providing lyrics for a songwriter, from an ad in the local newspaper. Later on, Elton and Bernie shared a room and bunk beds in the Elton father's apartment. Their first collaboration was a song called “Scarecrow”. Signed to MCA's UNI label for America, Elton went Top 10 with his second single “Your song” (1971); two years later, he had the first of his six number one seventees singles, “Crocodile rock”.

“There was something about his vocals that was an improvement on all the english vocals till then” explained John Lennon when he was asked about the new Elton John phenomenon, “When I heard it, I thought Great! That's the first thing that's happened since The Beatles happened”.

Many radio stations sold themselves to their listeners on his name alone, calling themselves “your number one Elton John station”, “the station that plays more Elton John than anyone” or “your official Elton John spot on the dial”. “If you ever die” John Lennon once told Elton “I'm gonna throw my radio out of the window”.

The 1975 suicide attempt, refered on the “Someone saved my life tonight” song, was the history about Elton going to married Linda Woodrow. Everyone around Elton strove to disuade him from rushing into marriage with Linda. The wedding date was only three weeks away when Elton and Bernie went out drinking with Long John Baldry at a Soho club, and he decided not to married. “I'm going to tell her” said Elton. Linda threatened dire consequences if Elton called the wedding off. At the end, Elton went straight to the telephone with an SOS to his mother. Taupin described the sarcastic situation on the Two Rooms project Tribute: “One day I was coming out of my room and walk down the hall, I smelt gas (...) I walk in the kitchen and there's Elton lying on the floor with the gas oven open (...) I started laughing because he'd got the gas oven open, he was lying on a pillow and he'd opened all the windows”.

In the 70s, Elton received a star on the Hollywood's Walk of Fame as LA declared it “Elton John Day” (21/11/75); he was the first rock star that was inmortalized in wax at Madame Tussaud's in London (07/03/1976); and he achieved a longtime ambition when he became chairman of Watford FC (June 1977). Elton's interview at the Playboy magazine saying “There's nothing wrong with going to bed with someone of your own sex. I think everybody is bisexual to a certain degree” was scandalous for the decade and marked the decline of Elton John.

In 1984, Elton John married a studio engineer, Renate Blauel, in Darling Point, Sydney, Australia. “I know a lot of people have said my marriage is a definitive cover up, and that I only get married to be proper” told Elton when he was asked about the surprising new “but that's just idle gossip”. 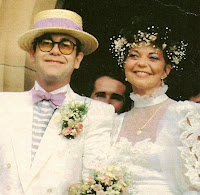 After that, the marriage went to end of the beginning of 1989, Elton John had health problems. He entered a Sydney hospital for throat surgery (05/01/1987) and he went in 1991 to hospital in Chicago “because I had an eating disorder. I was bulimic, I was a drug addict and I was an alcoholic. And that was all at once. I'll ask for help, I'll go away and I 'll live again because I really felt as if I was dead anyway”. In 1988 Elton successfully sued “The Sun” newspaper for damages after printed untrue stories about his sex life. “They can say I'm a fat old sod, they can say I'm an untalented bastard, they can call me a proof, but they musn't lie about me” declared Elton when he won the legal battle. With Elton getting sober in the 90s, and being a long active supporter of the fight against AIDS, he established the Elton John AIDS Foundation in november of 1992. 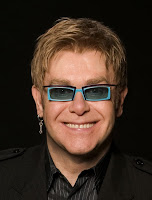 Elton was on the plane on his way to Ireland when he lost balance and keeled over, and he was rushed to a private hospital in London with an irregular heartbeat. Elton had a routine two-hour operation to fit an electronic pacemaker (in 1999).
by Jackrabbit on 11:39 pm