Hi Janel. Welcome to the “To Be Continued” Week. Nice to “meet” you. I love compilation albums, I recognize that. But I am not agree with the last Record Company releases... too much of the same. This week, as the Compilation week, I have to count with a special guest, trying to find that perfect compilation should be.

So... Could you tell us, please, who are you and where are you from?
Janel and I live in Atlanta, GA

Right. When you became an Eltonite? Remember the first time you heard Elton’s music and what moves you to buy his music?
I became a casual fan back in the 80's. The first time I heard an Elton song was probably early 70's. I remember hearing "Daniel" but, I was quite young and didn't know who it was singing. My first Elton concert is what moved me to buy all his albums.

Ok! What was it like seeing Elton for the first time and how many concerts have you been?
My first concert was in Atlanta on April 29, 2000. It was a solo show. I remember hearing the first few words of "Your Song" and saying to my friend, "oh my, I have a feeling this is going to be awesome". After that concert I walked out saying, "I've never seen an artist in concert like Elton". "What a fantastic show"! I was totally blown away. It was that first concert that hooked me. I've been to 6 concerts and will explain further along in this interview.

Nice!!! Which is your Elton’s item that you really appreciate, for being hard to get or for the happiness you’ve got to have it?
Actually, I have 2 items in my collection that I'm fortunate to have. I have an autographed picture of Elton personally signed to me that he sent. A friend had sent him a picture she drew of him and she told him about me. My other item is probably the Captain Fantastic vinyl picture disc. It took me a long time to get it and it also cost me some money for it.

Wow!!! You live in Atlanta, like Elton, when he is in the States. Don’t know if you ever see him in the greengrocers, waiting in the red lights in the street, on the steps in front of Park Place, or in an art gallery? I’ve heard about a tender story, when your stepmom wrote, onetime, a nice letter about you for Elton. Which is the story? Did she send it to Elton? Could you explain us something about it, please?First, I want to make this very clear. Just because I live across the street from Elton does not mean I know him personally! I am no different then any other fan. NO, I've never seen Elton around Atlanta and HAHA, he does not sit on the steps at Park Place. He is not here for that long of time when he is here. Elton is human like you and I except, he has tons of money.

The letter that my stepmom sent to him, I don't think he actually read it. It's NOT because he didn't want to, but he does not get his mail. Someone picks up his mail and sorts it out for him, first! Chances are it got set aside and it didn't get to him. That's okay! He probably gets a lot of fan mail. The reason my stepmom wrote this letter is because, it took me 3 years to receive Social Security Disability. I was born with Scoliosis, which is a curvature of the spine. I had surgery when I was 5 years old but over the years, the fusion of 3 or 4 vertabres has deteriated. I have lots of pain in my back, hips and feet and my curve is now 75 degrees. It's caused me to not be able to work a full time job. I had to do something. It took a long time to get it and when I got it, I told my parents, "I want to go to Las Vegas to see The Red Piano show". So that is what the letter was about. That I was coming to see his show in Vegas.

So that is why I've only been to 6 concerts. I don't have the physical ability to go all over the country. 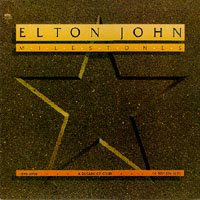 I think if there were to be a "To Be Continued" part two, it should have RARE material in this package. Yes, I have all the greatest hits but it's all the same songs. It's ridiculous that these record companies don't take the time to look into his rare songs that are not included on his albums. I'm tired of it always being for the casual fan. Sure, I once was a casual fan, but the casual fan has 5 or 6 greatest hits to choose from. It's time for us diehards to have a package with rare stuff and not just put them on a disc 2 of the Elton John original album. It's not fair that we have to buy an album we already have again, to get 4 rare tracks. I think if we had something like the Rare Masters CD would be very cool. Most of you know what rare songs I'm referring to and if I were to list them this will be too long.

Finally, could you tell me your five favourite Elton’s songs in running order, for my AllSongsList, please?
My five favorite Elton songs: Skyline Pigeon
Tiny Dancer
The One
Bennie & The Jets (Live)
The Bridge

Thanks a bunch, Janel!!!! really a pleasure to chat with you, it’s was worth the time spent with you, Janel. Take care.
Thanks, Miquel! I'm happy to have been able to help you out with the "To Be Continued", week.