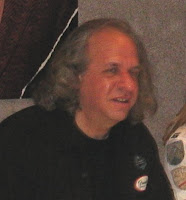 Fred Mandel, born in Toronto Ontario, started playing piano when he was four years old, and the canadian jazz-rock group Lighthouse was his first musical taste. Mandel joined Alice Cooper band, first as a band member, and then as the musical director for the group. While he was with Alice Cooper, he met Dee Murray and Davey Johnstone, who put Mandel to Elton’s band as keyboardist and guitar player, for his versality. Other collaborations included Pink Floyd’s “The Wall”, Queen’s “The Works” and toured with Kiki Dee in 1978, Queen in 1982 and Supertramp in 1983. He was with Elton’s band since 1984 to 1988.

Freddie is a superb musician with a particularly keen sense of humor, and an ability to attack a recording session with fresh focus and consummate musicianship every time, every take. Now he is involved in cinema.

picture courtesy of AnnaBCN
by Jackrabbit on 12:33 pm

Oops - Elton John's former bandmember Fred Mandel is not involved in cinema ... except to provide music! There is another Fred Mandel (many actually) who is in the movie business. Currently, Fred is working on his solo album, doing occasional live gigs in Los Angeles, and some session work. A notable mention is Fred's work on Jamey Johnson's award winning album "That Lonesome Song."