The Duet Interview!!!!! From Canada... I have to bring two of the most famous eltonites from the country!!!

I love this country. Can't do nothing about that. When I am viewing the list of singles charts successes in the country, I found more number ones than everywhere else... I found songs like "Some Other World (My God!!!) in the list!!! I thought about doing a duet interview. I did it last year with the greaest Sue.Uk and Lukesbox. In this new edition, I had to bring on two of the greatest eltonites, from Canada of course. Inmediatily I thought about two people. Both accepted the invitation. So, here on my side, I would like to ask a big applause to... Mookie and BlueBird!!!!!!!!

Ok!! When did you became an Eltonite? Remember the first time you heard Elton's music and what moves you to buy his music?

Mookie: I've been a fan since the early 70's when I heard his music on the radio. I just love his music, his voice, his sound... everything about him. 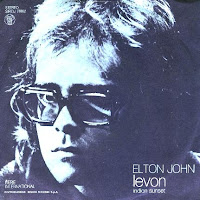 Blue Bird: I first heard Elton way back in the 70's. Your Song was the first Elton song I remember. I have bought his music in the various formats, 8 track, cassette, CD, I hope they don't come up with another format. I am now buying old albums (only on CD) so I can discover songs I have never heard or forgotten. Elton's music as well as most music makes me happy and I believe it is good for your soul.

Nice. What was it like seeing Elton for the first time and how many concerts have you been? And also, could you tell us if you ever have been in touch with him, get a signed autograph or even, speak with him or with other member of his band?

Blue Bird: When I was young I was not allowed to attend concerts, now that I am well in my 50's and my own family is grown I can do what I like when I can afford it. I have seen Elton 8 times over the last 5 years. I saw The Red Piano in Las Vegas 6 times and Elton and the band in Toronto in 2006 and on May 26,2009 Elton and Billy Joel, again here in Toronto. I don't know where I will see him again now he is no longer in Vegas. I am thinking I will have to travel abroad finally, vacation according to Elton's tour schedule. I have never gotten closer to Elton than row 4 in Vegas but I did get up on stage my last Red Piano show this April and I have Davey Johnstone's guitar pick which is now my prized possession. As I went up the stairs towards the stage Davey was right in front of me, I mouthed PICK and he nodded at me. At the end of the song security surrounded him so I thought I was done for, he flicked his pick from the top of his Captain Fantastic guitar so that it landed in front of where he was. I know he knew I was watching so as I walked by to leave the stage I picked it up. Not quite the same as his handing it to me I guess, but I have it and can now cross it off my list of things to do before I die.

Mookie: It was in the early 80s when I first saw him. I'll have to dig up the old ticket stub for the exact date and tour. I was in heaven. Could not believe that I finally got to see my idol in person. I've been to 15 or 16 concerts now. I've not been lucky to get an autograph but he did speak to me once.

Mookie, Which songs Elton should added to his current set list, that songs you thought you would never hear it live in yours 40 years of elton fan and, suddenly, he played it? And you Blue Bird, your favourite songs to be on? And, for you, which member of the band is (or was) irreplaceable? Miss someone, now?

Mookie: I would love to hear Cage The Songbird, Elderberry Wine, and Hercules perform live. Hearing Mona Lisas and Mad Hatters, Empty Garden and The Greatest Discovery were some of my favourites that I was lucky to hear live. I miss Dee Murray and would love to see Elton with Ray Cooper again.

Blue Bird: If I have to pick just one favourite it would have to be Funeral for a friend/love lies bleeding. Davey Johnstone is my favourite band member for all time but I miss Dee Murray and love Ray Cooper. I enjoy seeing all the members of the current band, Nigel, Guy, Bob and John.

Great! Well, you know that’s the “Duets” Interview. Do you like duets, or prefer an Elton “Duet For One”? In that case, which song and which partner have Elton to duet with? Which Duet have not to be happened? Do you detested anyone?

Blue Bird: I really enjoyed seeing Elton with Billy Joel, I hope they will put Face to Face out as as DVD. I can't say that I detested it but I really didn't care so much for Elton with Mary J Blige on I Guess That's Why They Call It the Blues.

Mookie:I like most ot the duets with Elton except Idid not care for Mary J. Blige on I Guess That's Why They Call It The Blues. I really enjoyed the one with Ray Charles.

What about Kiki Dee? Are you a Kiki Dee’s fan? Do you have her records? And, for extension, do you follow band member’s solo careers, for example Nigel as a singer, or Bernie singing his own songs, or Davey with Magna Carta?

Mookie: I do like Kiki's voice and have one of her earliest LP. I also Nigel's first solo and Bernies' first 2 solos plus 2 with FarmDogs.

Blue Bird: I loved Don't go Breaking My Heart at the time it came out. I have not followed any of the band members or Kiki's solo careers.

Ok! How it was, and still is, the success of Elton in your country? Which have been his hits in sales terms? Songs like “Some other world”, “Levon” or “Love Song” charted in Canadian Singles charts. Then, which are the canadian's favourite Elton's albums or songs? And could you still hear Elton's music in the radio, nowadays?

Blue Bird: Elton is on the radio every day in Toronto. CHFI is on the radio at the place I go for lunch and they play soft rock music, Elton is still tops on their play list. I would think Yellow Brick Road was the favourite Canadian album, I hear those songs a lot but of course Your Song, Candle in the Wind, Crocodile Rock are still played. I can't say I hear any Elton played on the new music stations, he is not quite what the kids are listening to these days. He played Levon at the concert May 26 here in Toronto, it was great to hear it live. Elton's concerts sell out wherever he plays in Canada still so he stills has millions of fans here. There is a mix of ages at the concerts, most of the young people know his music because it is their parents music. My three kids ( now adults themselves actually) know his music. Actually, my 31 year old son came to see Elton and Billy with me and said it is one of the best concerts he has ever seen.

Mookie: All I can say is Elton's music are classics...and have no time limit. There's not many artists and songs of current that would be around in 10, 20 years. Quality stuff stays around forever. There have been many hits over the years and I hear Elton's songs played daily on our local radio stations. Your Song, Bennie and The Jets, Crocodile Rock, Don't Let The Sun...., Goodbye Yellow BR.... among others are on current playlist.

Right! And which is your Elton's item that you really appreciate, for being hard to get or for the happiness you've got to have it?

Mookie: I really don't have a special item. If anything it would be something autographed but since I don't have one....I would have to say that the only other things that I cherish are the concert souvenirs and the photos that I have taken and the many newspaper clippings of Elton.

Blue Bird: Davey's guitar pick is now my favourite item. My friends and family spoil me each year at Christmas with Elton items. This year I received Terry O'Neill"s Eltonography which has the most amazing pictures. They have given me a signed picture of Elton, an Elton watch, picture frame, Red Piano mugs, picture frame.I have t shirts galore. I don't have an Elton room but I do have an Elton "shrine" with all my wonderful gifts. My husband gives me a Ticketmaster gift card each year so I can purchase my concert tickets to see Elton. Years ago I told him please don't buy me " things", I want to see Elton , that is what makes me happy.

Mookie: Funeral For A Friend, The Border Song, Levon, Something About The Way You Look Tonight, Harmony...(no fair that we can only choose 5)

Thank you very much. Would you want to add some observation or suggestion, or something you want to say to your other partner of the interview?

Mookie: Thank for the opportunity to do this with you.

Blue Bird: Mookie, I can't wait to read your replies. Canada loves Elton and as he says he is now 1/2 Canadian so I hope we get to see him again soon.

As allsongslist informed, “Bernie and Elton are planning on getting to work in a Los Angeles studio in February of 2010 for a special project. That will be a collaboration of old and new friends and will represent a direction that has been fermenting for years in the heads of its perpetrators”... What do you expect about this new project? What it could be?

Blue Bird: Maybe it will be a stage play using their music like We Will Rock You, or Momma Mia although they will probably want to come up with something that has not been done before. I can't wait to see what it is.

Thank you very much Marylin and Maureen, really a worth experience this interview. Wow!!! It was a funny thing and my great priviledge to meet you two. An honour you share your time with AllSongsList. I have no words, to tell thank you is just a little thing, you deserved more. Take care and good luck.
by Jackrabbit on 2:54 pm