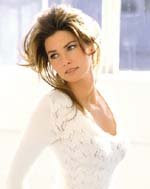 Shania Twain was born in Windsor Ontario, Canada, on the 28th augoust 1965. Music was Shania's life, she would skip classes in school to write songs in the music room and after graduation she played in bar bands that played anything from pop to rock. When she was 21 she moved to Toronto, to be a secretary by day and singer by night. Shania was just 22 when she had terrible news that her parents had be killed in a car accident. Twain cares for her three teenage siblings by singing at the upscale Deerhurst Resort in Huntsville, Ontario. Twain pursues her dreams in Nashville, signing a record deal with Mercury Nashville, which releases her 1993 self-titled debut album. Around that time, Twain begins writing songs over the phone with reclusive London-based producer Robert John "Mutt" Lange. In June 1993, after months of working together, they finally meet in person. By December, they're married.

She counts Elton John as her ''single most important musical influence''. The duo sang her "You're Still the One" and his "Something About The Way You Look Tonight" in this excerpt from "Shania Twain's Winter Break", during her concert in Miami in 1999.

Born James Eugene Carrey, on January 17, 1962, in Newmarket, Ontario, Canada. Jim Carrey grew up in a house full of fun and laughter and being the youngest of four children, he would often clown around to stand out from his siblings. When Jim was 15 he performed at Yuk Yuk's in Toronto, wearing a bright yellow suit made for him by his mother. At first he went down badly but with time and perseverance he soon began performing regularly on the Toronto club circuit, while supporting his family. After receiving positive feedback Jim decided to move to LA in 1979. Carrey began to look around for other performance outlets. He landed a part as a novice cartoonist in the short-lived sitcom "The Duck Factory" (1984); but hedidn't have a big success until 1994's Ace Ventura: Pet Detective. From there, Carrey's expressive face, expert mimicry skills, and physical brandof comedy kept the hits coming. He followed with The Mask (1994), Dumb andDumber (1994), Ace Ventura: When Nature Calls (1995), Batman Forever (1995),The CableGuy(1996), and Liar Liar (1997).

Jim joined in 1998 Elton in a rousing duet rendition of Elton's classic "Rocket Man." He came out on stage wearing one of Eltons red leather jackets with gold crosses adorend on it, and a pair of EJ's green glasses, with a red rose between his teeth. Elton started off the song and then two lines into it Jim started singing. He matched Elton note for note as they traded off verses, and split into harmony when the chorus came along. Jim messed up on a line of a song, but Elton corrected it. Then instead of singing "I think it's going to be a long long time" Jim said "I think it's going to be, friggin forever!" And then at the end Jim helped Elton by banging his head on the piano. After the show, Carrey was telling Elton about Kaufman, and explaining how the late comedian would get carried away by his alter ego, Vegas lounge lizard Tony Clifton. The vegetarian Kaufman, while channeling Clifton, would eat prime rib, drink Jack Daniels, and smoke. But when the Taxi star was back to his old self, he would clean out his polluted system by—get this—swallowing 30 feet of cheesecloth. John found the entire story fascinating, and decided to send Carrey a gift that would pay tribute to all three parts of his current psyche. The entertainer sent expensive red wine for the Carrey, Limburger cheese and magazines of large, naked over-50 women for Clifton, and 10 packages of cheesecloth for Kaufman.