The Eltonite's Day With... Andrea Grasso!!!

I've met very interesting eltonites over there. What is amazing is that everyone have their own history and it's great to listen those stories. I went to Italy to the promo of "Peachtree Road" in 2004. More than the concert, which it was great, it was meeting great people, fantastic and passionate elton fans, ... One of them is the man on my side... AllSongsList has the honour to receive the fantastic, the incredible, the unrepeatable... Andrea Grassooooo!!!!!!! Hello Andrea... Nice you are here... Thank you for the acceptation, really a pleasure to have you... Could you tell us, please, who are you and where are you from?

I’m a 32 year old boy from Italy… to be precise I was born and live in Sicily, the island at the end of Italy.

I’m a fan/collector of Elton and currently I’m one of the three admins of the Italian forum (http://eltonjohn.forumfree.net), that we like to see as a sort of an Italian Fan Club.

Also, I sometimes help Beppe, the owner of the Italian site (http://www.eltonjohnitaly.com), with the translations of the lyrics and other stuff.

I also had the idea (and developed it along with Beppe and Simona) of a site entirely dedicated to Elton’s collectors, that right now is still at its start (www.eltonjohncollection.tk); if one day we will manage to at least half-complete it, it will be very interesting for every Elton fan!

I remember having first seen Elton in an Italian TV show in 1988 singing “A word in Spanish”, but being very young at the time I wasn’t really interested in music, but that’s when I knew who he was!

Then I became interested in his music in 1992; when The One came out, it was very successful in Italy, so I was lent both The One and The Very Best from classmates; useless to say that I got mainly caught by The Very Best. After one year of hearing few Elton albums from tapes copied from someone else’s CDs, in 1993 I actually started to buy Elton’s records, and soon I was keen to have them all!

Ok!!! What was it like seeing Elton for the first time and how many concerts have you been at? And also, could you tell us if you have ever been in touch with him, got a signed autograph or even, spoken with him or with other members of his band?

Although my first aborted plan to see Elton live was in 1994 (it was a show with Ray Cooper in Rome), I was still too young and with no money to travel, so the first time I actually went to see him was in 1998 in Pesaro. I can’t remember exactly the feeling when I saw him for the first time, but I was surelly very excited and couldn’t believe that the man that I followed for many years was right in front of me.

Until now I’ve seen 9 concerts, and hopefully very soon I will see his 10th.

I know maybe 9 concerts are not much for a huge fan, but the main problem for me is that he often plays in the North of Italy, while I live in the South, so going to see him in the North involves big money (flights, hotels…) and also his tickets were always very expensive!

At the concerts I had several autographs from him, and also I shortly met him in Venice, but that’s a long story and somehow I’d like to keep it for myself. Never had any physical contact with any musician of his band, but as you know, I interviewed some musician of his past bands through Internet.

And how should be your dream concert? And which one of Elton's live shows you thought you should have been at, if you could, even back in time? 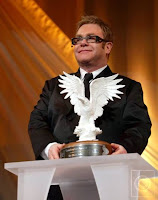 My dreamed concert would be Elton (with or without his band) playing only songs that he never played live so far! Mainly B-sides but also some unknown or long-forgotten album track! NO HITS at all!
If I could go back in time, I’d probably go to any concert from 1973; apart from that, Troubadour 1970, Dodger 1975 and even Central Park 1980.

Fine! Which are your favourite albums, or the Elton´s must to have songs that should be in an eltonite's ipod?

My favourite three albums are GYBR, Captain Fantastic and Made in England, but I like every Elton’s album, apart from Victim of love (which anyway I listen to every now and then); I also like Ice on fire and Leather Jackets; of course I can’t consider them among his best, but I like them.

As far as an i-Pod compilation, I have done in the past compilations for friends for trying to “convert” them to the EJ world, and usually I do a “personalized” compilation depending on which kind of music my friend likes.But myself, I prefer not to “mix” Elton songs in an i-Pod, I just prefer to listen to the whole albums with all the songs in their original running order (without “skipping” anything)!

If I should listen to “mixed” Elton songs, I would choose only demos and unreleased songs.

How was the success of Elton John in your country? Which references had italians about Elton, specially in the 70s and 80s? And the most succesful albums? Could you still hear Elton´s music now on radio stations?

Well, Elton’s success in Italy is very strange. I can’t really say much about the 70s/80s because I was a child not following music, but I think Elton was never much a mainstream artist here, rather a “cult” artist.

I can tell you that “A word in Spanish” was a big hit here (as I said before I watched the performance of this song in an italian TV show) and also “Town of plenty”, since its videoclip was used to end everyday a very popular show for children; consequently, Reg Strikes Back had a big success here, probably more than in England! Another album that had a huge success here was The One, along with the title-track.

Also, in 1995 Believe topped the italian single chart, but I never understood why….and The Big Picture was a huge success here as it was in every other country. But after that, I think that the following albums didn’t have a big success in Italy, just one or two weeks appearance in the TOP10 and then disappearing.

Anyway, everytime Elton plays in Italy, it’s almost a sold-out….but when you search for Italian fans in the streets or in the Net, you rarely find any of them!

Yes, we can hear Elton’s songs in Italian radio stations, but mainly the 70s/80s hits. When “The heart of every girl” was released, though, a radio station that you can define “AOR” passed this song very often, and so they did with "Electricity"! Once in the car late at night I was VERY surprised to hear "Mellow" on this station… but it’s a case of a clever radio station (Radio Capital), the other common stations only pass the usual hit every now and then.

Probably the first autograph that he did on an LP of mine was the item that gave me most happiness.

Talking of rarities, the most hard to get for me were three Cdsingles: Duets for one (Spanish promo), Stan (with Eminem) and Flames of paradise (French promo).

To the hard-core fans/collectors from all over the world: why not gather ourselves in a forum or somewhere else to discuss Elton’s music in deep? Nothing against the new fans (I was one of them many years ago) but I got a little tired of forums where people asks where this certain B-side can be found or if someone can pass them for free as MP3! I’d like to talk and discuss with real experts and with longtime fans to compare our collections or to discuss Elton’s life and music to an higher level than usual; and of course to trade unofficial material! ;)

Thank you very much, Andrea, really a worth experience for me to do this interview. An honour you share your time with AllSongsList. Take care and good luck.
by Jackrabbit on 3:07 pm