"Elton John is amazing! He heals and changes people. But what is most important is that he is not just a huge well-known superstar. He is actually a great individual person, who touches us all with his music and personality"... Someone, on my side, wrote this words when she saw Elton in Sundswall, Sweden, in 2003. Elton was on concert but he was suffering a bad cold. I couldn't find more appropiated words referring to Elton as the true professional he is. We have the chance to have here a very special guest... the woman who's been writing the reviews when Elton is in Sweden, along with Ulf Olby, another one of the greatest eltonites... Ladies & gentlemen, a big applause to the fantastic... Tanja_Friend!!!!

Thank you for the acceptation, really a pleasure to have you... Could you tell us, please, who are you and where are you from? 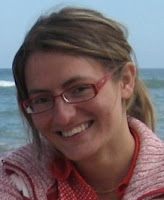 My name is Tanja. I live in Stockholm, Sweden.

Thanks!!! When did you become an Eltonite? Remember the first time you heard Elton's music and what moves you to buy his music? 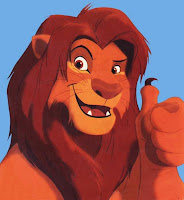 I became an Elton fan around 1995 when I saw the animated movie The Lion King for the first time and was absolutely fascinated hearing Can You Feel The Love Tonight. I bought the soundtrack and the newly released Made in England and since then I've collected all the passed and new albums and singles. The lyrics are so important to me. I could always asociate events in my life with what Elton was singing - sadness, loss, love, longing for love. It's as if Elton and Bernie were describing my own private world. That's why it moves me.

Great!!! What was it like seeing Elton for the first time and how many concerts have you been at? And also, could you tell us if you have ever been in touch with him, got a signed autograph or even, spoken with him or with other members of his band?

I've seen Elton 16 times, mostly in Sweden, but also in England and Norway. My first concert was in Oslo, Norway in the year 2000. It was a solo show and I felt shivers down my spine throughout the whole concert. Elton's voice was so pure and powerful. So full of energy and passion. I couldn't believe how those piano sounds and that voice could sink through my skin and make my heart beat faster. Through the years I've got many autographs, around 20, I think. I've never met Elton in person but did get a chance to meet Nigel and Davey backstage in Stockholm in 2002.

Which could be a great set list, in your opinion? Is there any song that Elton hasn’t played yet, and you think that he should do it? And you prefer the Elton’s solo tours or better with band? And, for you, which member of the band is (or was) irreplaceable? Miss someone, now? 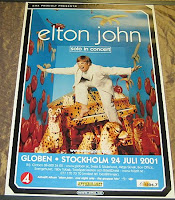 The best set list would be the one with a lot of variety and spontaneity. If Elton could pick a few different songs for each concert that he played. And some b-sides as well. I am tired of the same monotoneous set lists which have repeated themselves during the last 10 years, it seems like. I would really like to hear songs like Mellow or Slave or Salvation or Yell Help... anything old and hardly ever played live. I prefer band shows and I think that Davey and Nigel are irreplacable.

Since 00s, Elton's had recorded good albums which weren't successful in music charts terms. "Peachtree road", "The Captain and the Kid", "Rocket man Collection"... Why you think that so? Are people tired of Elton’s music?

People are not tired of Elton but they think that he's lost his energy and left it in the 70's. They can't see that he's developed and changed since then. Not for worse or better. He's just changed his style.

And how was the success of Elton John in your country? Which references had swedish about Elton, specially in the 70s and 80s? And the most succesful albums? Could you still hear Elton´s music now on radio stations?

Elton was very successful in Sweden in the 70's but has lost his edge since then. What you hear on the radio are mostly Sacrifice and The One - never anything new or old. It's strange. I don't really know what references Elton had here in Sweden in the 70's and 80's as I am too young to judge it.

As allsongslist informed: “Bernie and Elton are planning on getting to work in a Los Angeles studio in February of 2010 for a special project. That will be a collaboration of old and new friends and will represent a direction that has been fermenting for years in the heads of its perpetrators”... What do you expect about this new project? What it could be?

It could be yet another album of duets, probably Elton's songs sung by other artists with Elton on piano...

Ok! Which is your Elton's item that you really appreciate, for being hard to get or for the happiness you've got to have it? 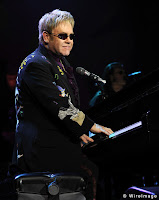 It's a very hard question. Maybe it was a T-shirt with Elton on it. When I started as a fan, I wanted all the world to know I loved Elton and was searching everywhere for a T-shirt with his image. Obviously, I couldn't find it anywhere and made an order on the internet, which was not so frequent back in 1995. When I got a package with the shirt, I put it on directly and went out on the street. Actually, all the CDs and videos I've bought with Elton brought me a lot of happiness, especially if it was a new release and the expectations were high.

Thanks so much. Would you want to add some observation or suggestion, or something you want to say to your other eltonites?

Well... all the fans of Elton I've known through the years have been marvellous and hospitable and kind. I want to thank Elton for the people I got to know through his music.

Thank you very much Tanja. Really a pleasure to chat with you. I get funny doing this interview with you, it was an enjoyable and worth experience. Keep Well.
by Jackrabbit on 12:50 pm