The Story Behind "Cadbury's Chocolate Ad" 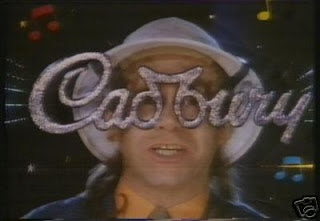 Three years ago, Elton was picked as the first to get the chocolate treatment by means of a poll conducted by Cadbury, which is celebrating the centenary of the Cadbury Dairy Milk bar. More than 200,000 votes were received, with celebrities like football player David Beckham and reality-television star Sharon Osbourne also placing in the top 10 behind Elton.

Before that, in mid 80s, Elton made an spectacular commercial spot for the "Cadbury Chocolate Bar" with a classic white grand piano, Elton's extravagant glasses and impossible hats, to promote "Dairy Milk", "Whole Nut" and "Fruit & Nut" new tastes.
by Jackrabbit on 12:53 pm