Elton In Advertising: Some Of The Campaings

Elton has also appeared in TV ads for Sasson Jeans (1984), Cadbury Chocolates (1985-86) and the state of Georgia (1995). The clothes company sponsored Elton’s 1984 American Tour after he and Taupin approached Sasson with the idea for the ad. The slogan became “Sasson Say So Much”. Rimmel cosmetics used the “your eyes” verse from “Your Song”.

1979 was the beginning of many Versace fashion campaigns by Avedon. One of the seasons included Elton, posing in various sensual postures.

Elton made for the Ronald McDonald Children's charities a gift cd, including 10 tracks: Take Me To The Pilot, Burn Down The Mission, Friends, Saturday Night's Alright For Fighting, Madman Across The Water, Tiny Dancer, Honky Cat, Crocodile Rock, Mona Lisas and Mad Hatters, and Levon. 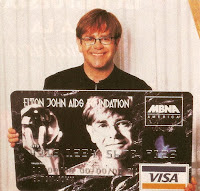 1995 appearance VISA Gold. With the collaboration of MBNA America Bank to raise funds for the Elton John AIDS Foundation.

Viva Glam IV, a frosted rose and gold shimmer lipstick, was introduced with Mary J. Blige, Shirley Manson and Elton John in 2002. Every cent of the selling price of MAC’s Viva Glam VI was donated to the MACAIDS Fund to support men, women and children affected with HIV and AIDS.

To celebrate the first time Elton John has ever played the state of Vermont, native ice cream kings Ben & Jerry have concocted a new flavor dedicated to John called “Goodbye Yellow Brickle Road,” with all proceeds benefitting the Elton John AIDS Foundation. The ice cream is described as “an outrageous symphony of decadent chocolate ice cream, peanut butter cookie dough, butter brickle and white chocolate chunks.” We assumed “brickle” was just a made-up word to make a punny tie between the ice cream and John’s hit “Goodbye Yellow Brick Road,” but butter brickle is actually the stuff that Heath Bars are made of. “Goodbye Yellow Brickle Road” will be saying goodbye sooner rather than later, however, as the limited edition flavor will only be available in B&J’s Vermont Scoop Shops from July 18-25. 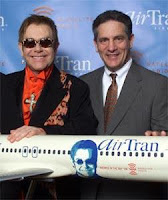 Airtrain Airways, one of America’s largest low-fare airlines, and XM Satellite Radio, a number one american satellite radio service, celebrated the official roll out service on its flights, with a world-class audio entertainment service. Elton unveiled a commemorative aircraft livery that adorned a select number of planes.

Royal Mail Advert oversaw a number of innovative campaigns to raise the company's profile, one of those included the Christmas advertisements featuring Elton John (yes, the man that thought internet should be closed) on a PC computer demanding a surprising product. 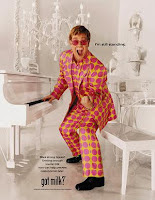 God Milk? Their ads would typically feature people in various situations involving dry or sticky foods and treats such as peanut butter. The person then finds himself in an uncomfortable situation due to a full mouth and no milk to wash it down. At the end of the commercial the character would look sadly to the camera and boldly displayed would be the words, "Got Milk?". Elton wore too a milk mustache for the got milk/Milk Mustache campaign. The singer donated his fee for the ad to the Elton John AIDS Foundation. The ad featuring Sir Elton debuts in the December 25 issue of Time magazine, hitting newsstands December 18.
by Jackrabbit on 1:19 pm