Jack Rabbit In London (and IV)

I returned to the EJAF in 1997 but they changed their headquarter. That was not so long so, I went. I called and they opened the door. I meet a guy called Michael (can't remember the name). He was so gentle with me and asked me where I was from. He gave me a book, a signed picture of Elton, three cds (he had then "The Big Picture", not released when I was there, but told me he couldn't give it to me for obviously reasons), a subscription to the East End Lights Fanzine and when I asked him about Elton, he showed me Elton's office at the foundation: unbelievable!!! He had one jacket there, gold discs on the walls, paintings, ... wowww!!! A pity he wasn't there, he was in America. Me and Michael lost contact after two or three letters days on. Actually, I don't know if he still is in the Foundation working. I returned again in 2004, again in a new headquarter (see picture), and nobody could give any reference to Michael.

Rocket Pictures was the same headquarter than the Foundation, but there was a recepcion. It wasn't the same, because the recepcionist didn't let me to be there, unlike the other times.

Last station was Woodside. I went to Windsor, I did a picture as if I was Elton on the cover of "A Single Man" album, and I took the bus: west on Castle Hill toward Market St., then on the left on High Street, Kings Road, bear A308/Albert Rd until Straight Road. Half an hour until I arrived at destination, as the bus driver said to me: Bells Of Ouzeley Pub and then on foot.

But between here and Woodside should be about another half an hour walking and it was mid afternoon. I wasn't sure the bus driver said the best option for me. So I was a bit disappointed. On the left there was a park, with boats, and people strolling around. I met a gentle person, one man called John who gave me the correct direction to go to Woodside. My surprise was when he offered me to drive by car. I inmediatily said "yes". So, we went. We turned right at B3021/St Luke's Rd, continue toward St. Luke's Rd and, finally, Crimp Hill Road, and Woodside. 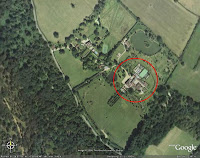 It was incredible. I had seen so many pictures of eltonites like me, and their pictures in front of Elton's house, and finally I had mine. John told me he met Elton one time and he remembered when Elton was in town walking and people didn't recognize him because he didn't wear glasses. I wanted to pay the trip to him but he didn't accept it, because he thought he spent great time chatting with me. Whenever you are now, John, God bless you!!!