Like many bands in the mid-1960s, the Bonzo Dog Doo Dah Band formed from a collection of friends at art school. The original line-up included Vivian Stanshall, Neil Innes, Roger Ruskin-Spear, 'Legs' Larry Smith and Rodney Slater. The resultant band of former Goldsmith students started out locally, on the London pub and club scene; they went on to have a short but prolific recording life, mainly between 1967 and 1969. During this period they also featured as the resident band on the TV show "Do Not Adjust Your Set". Before disbanding in 1970 they released four albums and toured extensively.

Larry recorded with Elton doing tap dance on "I Think I'm Going To Kill Myself" and toured with him as a band member. On a 1972 concert, he performed an Elton's rendition of "Singin' In The Rain" while dressed as a bearded bride.

He also toured with Eric Clapton, Yes, John Cale, Rod Stewart & The Faces and George Harrison, among others. In fact, he was a close friend of Harrison for many years and designed the cover for his "Gone Troppo" album. He also sang the theme song of the Harrison-backed film "Bullshot". Harrison wrote and recorded a song about him called "His Name is Legs (Ladies and Gentlemen)" on his album "Extra Texture". Apart from his recording projects, he has exhibited paintings and graphics, designed stage-sets and costumes, appeared in a movie or two and dared to lecture at the Oxford Union. 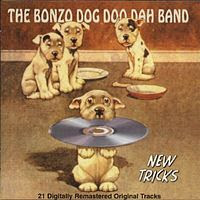 On 28 January 2006 with other surviving members of the Bonzo Dog Doo-Dah Band he played a concert at the London Astoria. Plans are in place to release and publish his autobiography: "LIFE IS LIKE A HORSE'S ARSE - (It Should Always Have A Tale To Tell)" along with a collection of his artworks. Apart from various other commitments, he has created Commotion Pictures in order to produce new, original and innovative works for stage, screen and television.

sources from www.legslarrysmith.com
by Jackrabbit on 3:12 pm