The Story Behind "Honky Cat" 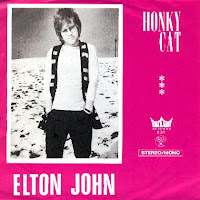 Bernie's lyrics alluded to his decision to leave his farming birthplace Lincolnshire for the London city lights "livin' in the city boy is gonna break your heart".

Bernie had adopted a more straightforward form of writing lyrics presenting his credentials of his more poetic work. Elton at the same time, delivered his best piano playing in this song.

Memorable is Elton's live version, in 1974, with good solos from Davey Johnstone on lead guitar and Ray Cooper's on duck call, an instrument like a kazoo, before a final chorus of "Oh Susannah!".
by Jackrabbit on 2:48 pm