The Story Behind “Rocket Man” 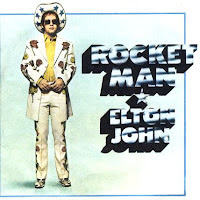 Lyricist Bernie Taupin said the song borrowed from an identically titled song by Tom Rapp of the group Pearls Before Swine. But the two songs are very different. In our case, the astronaut in question is pining for his wife. Beneath the veneer of heroism he feels lonely and dejected. It's a fine example of Taupin's sleigest of hand. “Rocket man” is intrepid and gung-ho as astronauts were deemed to be in those days of NASA near infallibility and regular Apollo missions. Only in a closer inspection is the rocket man as imperfect as his fellow man. But the reference to being high as a kite does allude to drug use as much as heavenly altitude.

As Taupin hit the bend in the road on a star-filled night close to his parents' home in the Lincolnshire countryside, the opening lines came to him. “I remember driving down the road and all of a sudden it just –BANG! came into my head the whole first verse (...) and I remember thinking “Oh God! I've got to remember that” (...) and rushing into the house and writing it down furiously before I forgot it” reminded Taupin on the “Two rooms” project.

In the fall of 1977, “Rocket man” was voted “Best Science Fiction Song” at the National Science Fiction awards. Taupin accepted the award. On another side, Elton performed "Rocket Man" at the Launch Site of the Space Shuttle Discovery in 1998, when former Mercury astronaut John Glenn became the oldest person to go into outer space at the age of 77.
by Jackrabbit on 2:53 pm