The Story Behind "Mona Lisas And Mad Hatters" 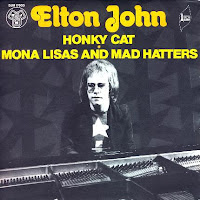 Bernie wrote the lyrics during first visit to New York in September 1970. A man had been shot outside his hotel in the midtown of Manhattan on the day he and Elton arrived. The poignant words were penned in castigation of the inhabitants of the city.

Bernie, who kissed the ground the first day he arrived in the U.S., felt that it was an unbelievable but dangerous place "I was still very naive" explained Bernie, "it's about naiveté and experience. And New York seemed like the bowels of hell".
by Jackrabbit on 3:33 pm