The Story Behind "Heartache All Over The World" 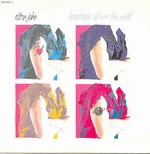 It was the first new song completed for the album and had to be an esque of “Wrap Her Up” but failed. If “Wrap Her Up” is all about the virtues of opposite sex, here Bernie describe another saturday night’s alright... not fighting but when “the heart’s on fire” going “To Tokyo to Rome” looking for a girl. And the video-clip is as much as the same of “Wrap Her Up”, such a copy, with Elton singin’ live with his band.

Elton himself feels dishonest singin’ “girls girls girls have pity on me” because despite his marriage to Renate Blauel, he’s sexual history was well-knowing.

Elton even didn’t play on the track, leaving the synthesizer symphony to Fred Mandel. Different studio mixes of this song were on various singles.
by Jackrabbit on 10:51 pm