The Story Behind "Electricity" 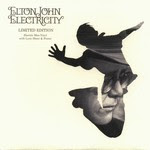 Elton was moved by the tale of the young miner's son who just wants to dance and decided to put soundtrack to the stage production. Elton said the theme of a father failing to understand the artistic aspirations of his son had mirrored his own upbringing. He was reduced to tears when he saw the first screening of the film at the Cannes festival four years ago. "I thought I had written a very personal and peculiar piece about growing up in the North-east and about wanting to create art against all the expectations of my background," he said.

"Electricity" was the first song to be released from the resulting soundtrack. In Natasha Tripney reviewer's words "it's a touching account of the release and passion that Billy feels when the music takes hold of him and he starts to move - the boy's feelings plausibly and poetically evoked by Lee Hall's suitably theatrical lyrics".
by Jackrabbit on 1:56 pm