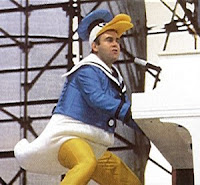 It was said that "Ducktail Jiver" would be finished and included as a bonus on an upcoming SACD reissue of "Caribou" album and that Davey Johnstone would add guitar to round out the recording. On the original session, Davey provided acoustic guitar. That project maybe would continued the "Elton John" and "Tumbleweed Connection" Deluxe editions.

"Loose lips keep him rolling on his whitewall tires
Burning out his diesel now, looking like a forest fire
Ducktail jiver, common pearl diver
Let you have a piece real cheap
Those Sunday sermons, gotta start learning
How to look before the lion leaps

Oh I'd be Santa Clause in something more
Than a honeymoon in San Moritz
Ducktail jiver, nine to fiver
I'd like to buy a piece that fits

Overloaded, railroaded
On the border of a Spanish town
Adios amigos, me got to go
Before they cut this poor boy down

So I'd like to buy a drink for someone
A pitcher and a glass
My circuit's run down, my fuse is blown
My childhood came at last

Sun-soaked, rain-choked
I need to get this battery charged
Miles behind my parents' time
Living in the world's back yard"
by Jackrabbit on 8:25 am