That was the 25th week, the Caribou week and today we have an special guest, from Orlando. Hi Maryinfl8, I am glad you accept it, it’s an honour for me. I really like your posts on eltonjohn official website forum and I am sure we have a great time chatting about Elton’s world.

I am Mary AKA MaryinFL8 from EltonJohn.com. I was born and raised in Michigan, moved to Orlando, Florida USA in 1982 at the age of 23.

Perfect! When you became an Eltonite? Remember the first time you heard Elton’s music and what moves you to buy his music? 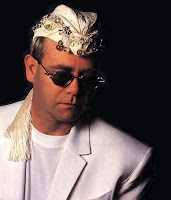 WOW!! If I remember correctly.. LOL I remember listening to Elton on the Radio singing Bennie & The Jets , I was 14 years old and fell in love with his music. The first album I remember buying was Goodbye Yellow Brick Road in 1973. Coming from a large musical family where everyone in the family played one or two musical instruments, being in the family band and playing for party's in the 70's, music was a big part of my life. Elton John's words & sound of his music really moved my soul as a teenager and also helped me through some family hard times growing up, I have been following his music since.

Ok! What was it like seeing Elton for the first time and how many concerts have you been?

Being from a large family and so young, then a poor college student I did not get to see Elton in person until the 80's. After graduating from college and moving to Orlando. I was able to go to a concert. It was one of the best days of my life. Of course back then it was like having an out-of-body experience! I do not remember how many concerts I have been to since, with 2 more Elton concerts in Florida coming up in a little over a week. 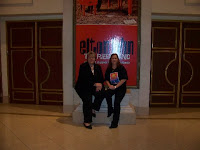 Nice!! Elton had his golden age era in the 70s, specially in your country, the U.S.A. Sometime, John Lennon told him: “if you die someday, I will throw my radio out the window”. It was that really?

I would agree with John Lennon. In the 70's when growing up in the USA you could not turn on the radio, watch TV, go to a store, drive down the road or pick up a magazine with out hearing Elton's music or seeing something with Elton John on it. As an adult, I go into store's and hear his music playing all the time even today. I do not even want to think of the thought of having to throw my radio out the window for that reason.

I think Caribou was a great album with Elton only having 8 days to record 14 numbers and this was the first time recording in the USA for Elton. Elton even stated that the album was recorded under the most excruciating circumstances and he thought he would never get the album out. I personally think it shows what a true musical genius Elton John was and is today. My favorites from the album are of course "The Bitch is Back" which today Elton uses at his concerts as one of his theme songs and always is on his piano while singing it. It always reminds me of Elton's very flamboyant days. "Don't Let The Sun Go Down On Me" which the words and music have always reached deep down to my soul. "Pinky" was also a great song. "Ticking" Elton still sings this song in his solo concerts, we all know that Bernie wrote this song about the increasing violence in America. Which Elton shares at his concert is still a growing problem today.

With Elton signing a long contract with MCA that year and Elton and Bernie were doing nothing but music 24/7 in those days. Even with the pressures of recording all the albums. The music and songs were a testament of his God given talent. As Elton has stated those first 5 years he did some of his best work.

Ray Cooper joined the band for the Caribou Tour. What do you think about Ray? And which are your favourite band players of all time?

All I can put in words about Ray Cooper is "AWESOME" What a wonderful musician. WOW!!! favorite band players would be Davey, Nigel, Dee. In the last 10 years I do have to say I think Bob is great playing the bass and is one of my favorites. :-)

What do you think about next step Elton should do? Recording an album with new material? Doing more musicals? Retire?

On EltonJohn.com have heard that Elton is working on a new album which is wonderful music to my ears! Elton seems very happy having all the different musical avenues in his life and I say bravo Elton!!.....do everything that makes you happy. We will not discuss that dirty word "retire".....heaven forbid!!! LOL

Totally agree...Which is the Elton’s item that you really appreciate, for being hard to get or for the happiness you’ve got to have it?

This is a hard question, I could go on for days talking about the many treasured items and experiences. I will try and keep it short (LOL) and if you would like the long stories you can email me for the details. Each one of my Elton John items have a special story & meaning with it that I will treasure always. I have a few items autographed by Elton. I really love & treasure the Red Piano Show (Las Vegas) Poster that Elton John autographed "To Mary, With Love, Elton John".

November of 2007, I had a sign made and took it to a concert, I got down front to get Elton to autograph the sign, 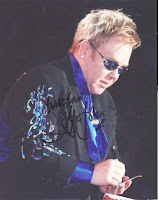 I got just to the edge of the stage and threw the sign over the monitor hanging on to the edge of it. Elton did autograph it, when he put the sign back on the monitor it slipped out of my hands and onto the stage. Elton saw it fall on the stage and that I could not reach it, Elton slid the sign back to me with his foot so I could reach it. I had that sign, concert ticket, photos & the You Tube DVD of Elton autographing the sign professionally framed. It is an item I do appreciate.

An Elton John experience of a lifetime & dream came true for me on March 25,2008. I met some people from EJ.com and went to see Elton John on his 61st birthday, The Red Piano Show in Las Vegas. Nancy & I were surprised when we got our tickets and they were 2nd row seats, right in front of Sir Elton John. Which meant we got to go onstage during SNAFF. SNAFF started...Off we went to the stage....there it was, that beautiful Red Piano and OMG...there he is ...ELTON, playing and singing, just waiting for me to get there so he could sing to me....LOL ;-) It was Nancy, Pinky & I, I was just behide/inbetween them, no one in front of us but our Knight, Sir Elton!! The RUSH of emtions was beyond words. Elton was inches away from us. Singing and playing, we could hear what his voice sounded like without a microphone. It was breathtaking to say the least. AMAZING!!! I could not stop watching Elton and smiling with my hand on that piano. When I put my hand on the piano it was another dream of a lifetime moment, I was watching Elton sing & playing the Red Piano, I could feel the music he was playing at that very moment going through my hand into my soul, my heart was overflowing!! 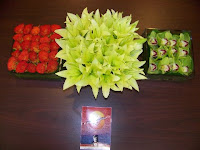 Then Elton looked at me and then my shirt with the birthday card on it and then we locked eyes again and he said "Thank You", his eyes were so sincere when he said that. My heart melted and at the same time I was so happy that he acknowledged the birthday card which meant he got to see the flowers and EJAF donation from EltonJohn.com community forum members. This was more than I could have ever dreamed. Elton left the stage after the song, then he came back out onstage, he walked across the stage...I got my shirt out that I had made in Vegas that said "Happy Birthday Elton" on it in big purple and red letters....I held it out in front of me, as he came and stood in front of me, he looked at my shirt and looked at me and pointed at my shirt and told me "Thank you" well .....I said in my quiet voice(LOL), Happy Birthday Elton, he smiled. What a lifetime of many dreams coming true in one day and happening on such a very special day as Sir Elton John's 61st Birthday and with wonderful friends to share it with. I would love to tell Sir Elton John that his life and his music have made such a profound impact on my life, that my life will never be the same 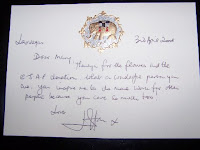 The most recent Elton John treasure of a lifetime I received was a personal handwritten letter from Elton John himself.

NANCY AND I DECIDED TO TAKE KEN'S ADVICE AND SEND ELTON JOHN A PERSONAL BIRTHDAY CARD ALSO. SINCE WE WERE ALREADY IN VEGAS WE OPTED TO DROP OFF THE BIRTHDAY CARD AT CAESAR'S, NOT KNOWING IF HE WOULD RECEIVE IT. IN THE PERSONAL CARD WE STATED WE HOPE HE ENJOYED THE BIRTHDAY CARD, FLOWERS AND EJAF DONATION FROM EVERYONE ON ELTONJOHN.COM TO MY AMAZEMENT HE GOT THE CARD AND I RECEIVED A PERSONAL NOTE FROM SIR ELTON JOHN HIMSELF!!!!!!!! I TRUELY WANT TO SAY THANK YOU TO EVERYONE THAT CONTRIBUTED TO ELTON JOHN'S BIRTHDAY. I CONSIDER THIS NOTE ADDRESSED TO EVERYONE AT ELTONJOHN.COM AND NOT JUST ME. AS YOU CAN SEE SIR ELTON JOHN DID APPRECIATE IT VERY MUCH!!!

WHAT A TRUE MAN OF COMPASSION.

Thanks a bunch, Mary. Really a pleasure to chat with you again. Enjoyable experience. Take care.
by Jackrabbit on 4:09 am