Hi Dazza. Nice to “meet” you. I was very interested in interviewing you because I know you’re a great collector of Elton’s items. You started like me, recording Elton’s songs from the radio to tapes, waiting to buy his last album. And you’re a dear kiwi, as Elton named to all of you in one of his concerts.

So... Could you tell us, please, who are you and where are you from?
My name is Darren George, born & grew up in city Hamilton, New Zealand (North Island, 1.5hr drive south of Auckland) I was born March 1974 (very close to Elton’s Birthday!!!) I now live in sunny Gold Coast Australia since March 2006.

Right. When you became an Eltonite? Remember the first time you heard Elton’s music and what moves you to buy his music?
Like Elton I grew up in a house with music, manly radio. To this day my parents still go to sleep radio going in their bedroom. When I was 11 or 12 I stared to get interested in music. I had tape cassette player and blank tapes and use to record songs I liked off the radio. 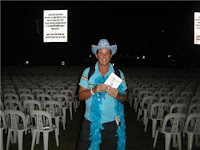 Fantastic. What was it like seeing Elton for the first time and how many concerts have you been? And also, have you got Elton's autograph at a show? Or have you got a guitar pick from Davey or a drum stick from Nigel or John?
I have seen Elton 12 times in concert now:

I still think my fist concert was the best; I was 18 and went up with 3 friends I went to school with. I had the 1992 Barcelona concert on VHS, which I had purchased some month’s prior and thrashed, I love the way the song sounded so much like the original. 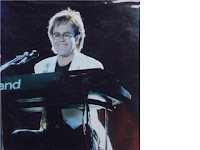 We were very lucky with the setlist Elton played in NZ in 1993. We got all the songs as seen on the Barcelona concert on VHS plus….. Candle In The Wind; Healing Hands;
Stones Through From Hurtin'; Whitewash County; Rocket Man; I Don’t Wanna Go On With You Like That.

I only got my Elton John Autograph for the first time on this latest solo tour. I went to 2 shows and got items signed both times!!!!!!

Great. Which is your Elton’s item that you really appreciate, for being hard to get or for the happiness you’ve got to have it?

Well in 2002 when I went to London for 3month holiday I got to go to Elon’s Out Of The Closet clothes sale. I didn’t have thousands to spend plus my sizing is a bit larger than Elton’s but I purchased pair of Black Italian leather shoes with sequins around the ankle for 175pounds and a Versace Vest 125 pounds, its black and white, and I thought I recognized it form the 1995 Academy Awards performance. 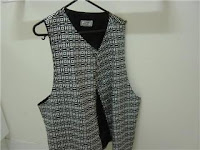 Later when I checked on the Tantrums & Tairas video I saw that it was different design.

Finally, could you tell me your five favourite Elton’s songs in running order, for my AllSongsList?
I find it hard to list songs as I love so many. Sacrifice was the song that got me hooked and the album Sleeping With The Past.

Thank you Darren, really a pleasure to chat with you. You really full covered my expectations. Take care.
Oh and im Gay and was an only child for the first 6 &3/4 of my life, so I feel a connection with Elton the person.
by Jackrabbit on 7:17 am

Hello my name is Jane, few days ago i open my new blog. I would like to add your site to my blog, that I think and hope it will help inform visitors about your site. I select for it's quality your blog - structure, design and content. I would like to ask if you can provide me more, details, information about your site.
my blog is - http://myspainradio.blogspot.com/ and you can leave your information in the comments of this page http://myspainradio.blogspot.com/2008/04/radio-music-networks-blogs.html