The Story Behind "Sad Songs (Say So Much)" 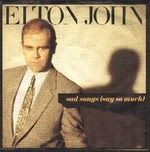 With “Sad Songs”, Elton sings his joyous tribute to the world’s melancholy music despite the song isn’t sad at all. Bernie wrote a lyric with the purpose of joining diverse group of people together, sharing their grief, finding they’re not alone. More than this, and in Bernie’s words, a sad song is “hearing something on the radio and remembering what you were doing at a time in your life”.

Elton’s intention was to put “Here Comes Miss Hurt Again” on the album, a country and western number, but finally prevailed the idea of that song didn’t fit. So, Elton angrily took another lyric of Bernie’s set and composed “Sad Songs” tune in four minutes, using a synthesizer and a drum machine. The first recorded version took a slower, more gospel approach; it was scrapped, but a similar rendition has surfaced in live shows. When Bernie heard the music exclaimed: “This is going to be a number one all over the world!”.

“Sassons” clothes’ company sponsored Elton’s 1984 American tour, and appeared in the adds with the changin’ line “Sassons say so much”.
by Jackrabbit on 1:27 pm