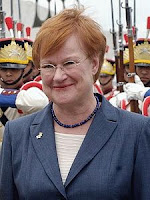 Tarja Kaarina Halonen is the current President of Finland. She began her first six-year term of office in 2000 and was re-elected on January 29, 2006. She is the first woman to hold the office. Halonen was born on 24 December 1943 in the district of Kallio, Helsinki, traditionally a working-class area. From 1975 until 1996, she was a member of Helsinki City Council. Additionally, in 1979 she was elected to Parliament as a member for the Helsinki constituency. Throughout her political career, Halonen has been a strong supporter of human rights and international solidarity. She describes herself as a "relative pacifist", meaning that she doesn't support unilateral disarmament. As a SETA's activist member, she attended board meetings and participated in planning how to achieve legal changes. Back then, Finland still had a law prohibiting 'encouragement to lewd acts between persons of the same sex'. Halonen, a MP since 1979, made in 1981 a proposal in the parliament, together with a group of other MPs, to repeal that prohibition and to start the work towards gay-inclusive anti-discrimination legislature.

Mika Pauli Häkkinen, The Flying Finn, was born in Helsingin maalaiskunta (now Vantaa), Finland on September 28, 1968. When Häkkinen was five years old, his parents hired a go-kart for him to take to a track near their home. On his first lap, Häkkinen was involved in an accident, escaping unhurt. Despite this crash, Häkkinen wished to continue racing and after persistently annoying his parents. After a move into British Formula 3 in 1989, Hakkinen won the championship in just his second season, with West Surrey Racing. After his first experience in Formula 1 with Lotus, he moved to McLaren in 1993. He was employed as a test driver, Ayrton Senna and Michael Andretti being the race drivers. In 1995 a serious accident during practice at the Australian Grand Prix brought him within inches of his life. A tyre had deflated at high speed with the result of a hard impact into a tyre wall, severe head injuries and a coma. However, he recovered and returned to racing, and won his first GP in 1997, which was the European Grand Prix of that year. Häkkinen announced his retirement from competitive motorsport on Sunday, November 4 2007. He was quoted as saying that the decision "was not an easy one," but added that "racing is still in my blood and this decision does not mean that this will prevent me from racing for pleasure.

Veteran defender Sami Hyypia, born on October 7, 1973 in Porvoo, Finland, is firmly established as a Liverpool legend after nearly a decade of unblemished service. Hyypia played ice hockey initially but went on to pursue football as his career owing to his parents’ influence. His foray into the world of football started at Kokkolan Palloveikot and later at KuMu before he joined Myllykosken Pallo (MyPa), a Finnish football club, in 1992. While he was in MyPa, the club won the Finnish Cup in 1992 and 1995. At the age of 22, he went to Newcastle United to catch a glimpse of English football. In 1995, Sami Hyypia joined Willem II Tilburg, a Dutch football club, and played 100 games for it during his tenure of 4 years from 1995-99. In his final season, he captained the club to qualify for the Champions League and won the title of Premier League’s Player of the Month. Liverpool signed Sami Hyypia in May 1999, and he went on to share the captaincy with Robie Fowler during 2000-01. He was awarded the Finnish Football Association’s Player of the Year title in 1999, 2001-03, and in 2005-06.
by Jackrabbit on 2:44 pm