The Story Behind "Music Change The World" 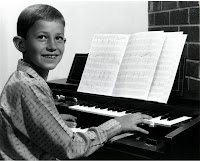 It was 1985 when this 8 year old australian boy called Brendan Woithe wrote a song, "Music Change The World", which it was used by 2 MMM to promote Bob Geldof's "Live Aid" Concert. Also it exists a 1986 australian video in which Elton performed “Music Change The World”, used by the promotion of an YMCA benefit. Brendan was one of the Winners of the International Children’s Peace Prize. At Christmas '85 it had been the presentation of Brendan to Her Majesty The Queen when song closes Royal Celebration of Youth as the Finale broadcast on New Year’s Day International Year of Peace.

"Can music change the world? Fucking right, it can," Bono from U2 said. "At Live Aid, I remember Bob Geldof saying how obscene it is that a black piece of vinyl is saving lives. It's obscene the way the world is. And it's absurd that a singer in a rock band puts on a pinstripe suit and goes for a walk down Wall Street banging on doors. But you know what? They opened."

But what happened to the young boy, twenty years then? Now Brendan is a composer & sound engineer who increasingly is working in new music and audio areas, attempting to bring new sounds and techniques to a wider audience. Since completing a master in sound at the Australian Film Television and Radio school, Brendan has worked as a composer, sound engineer and designer for varied projects including an ABC/Becker documentary, Unfit to Command (composition), Bent St Theatre’s Time Machine (composition and sound design), ABC’s AFI award winning comedy show Double the Fist (sound) and new Fox 8 drama Love My Way (sound). Brendan has recently won the 2004 International MPSE (Motion Picture Sound Editors) Golden Reel award for Best Sound for the short film Terratoma and has also won the Sydney Golden Eye and Kaleidoscope awards for best sound in short films. He is currently working on dermis, live sound sampling and manipulation of a saxophone quartet and live electronics.

He could always explain Elton sang one of his lyrics... although he was eight years old!!!
by Jackrabbit on 1:29 pm